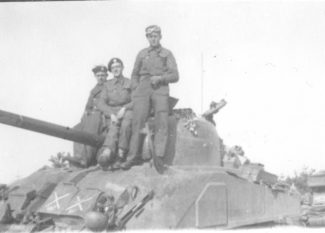 Ken Worzburger was only sixteen when he arrived in England from Germany, just nine days before the Second World War started. After being interviewed and declaring his allegiance to Britain he was allowed to stay. Immediately he tried to find employment but each time he obtained a position it was given to an Englishman by the employment agency. Finally, he managed to obtain work with a Jewish firm of tailors, making army uniforms. He spent his nights on the roofs of London buildings, fire watching. Sadly, he learned that his parents had been murdered in a German concentration camp. Wanting to do his bit, he joined the Army but, being a foreigner, in 1943 the Army changed its mind and immediately he volunteered for the Royal Tank Regiment. He changed his name to Ward in case of capture but his dog-tag still had a “J” on it, showing he was Jewish. He decided to destroy it if he was taken prisoner.  He became a tank wireless operator and waited patiently for the invasion of Europe. Finally, on D day, the 6th of June 1945, he landed on Gold Beach in France, as part of the crew of a Firefly tank. After surviving four tank explosions he finally finished up in Berlin as an interpreter, working for the Military Police, tracking down German war criminals. When he was demobbed he married his girlfriend, Joyce and they lived in Wickford.  Before he died, he wrote “And the Band Played On”, a very enjoyable read of his War Time experiences.