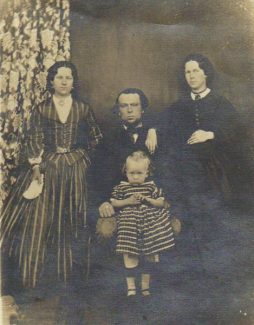 In 1860 he married Anna Murray (standing on the right of the photo), from Laindon, probably in Wickford. The same year they had their first of eight children, Frank (standing at the front), whose son, Silva, started Carter & Ward, who are still a prominent business in Wickford.

John died 23 November 1909, aged 73.  His funeral took place at St. Catherine’s Church and was attended by a large number of family and friends.  He was buried with two of his daughters who’d both died young.  Anna was also eventually buried with them.