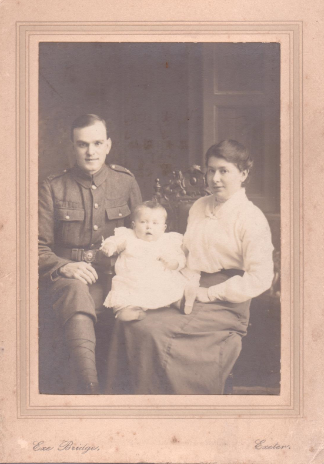 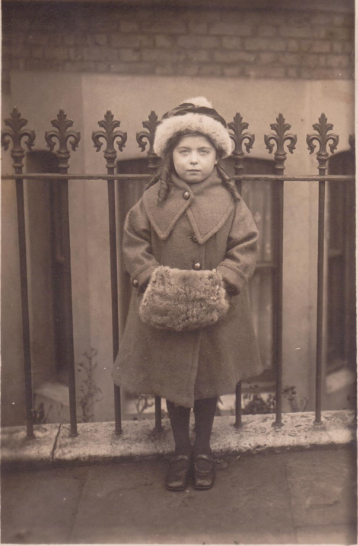 Her family came to south Essex, Hullbridge, when she was a child, partly to give her the benefit of country air, having been described as a rather sickly child.  It was said that she was a bright girl and when she left school she started travelling up to London with her father so that she could attend Pitmans College and acquire the valuable skills of shorthand, typing and book-keeping. 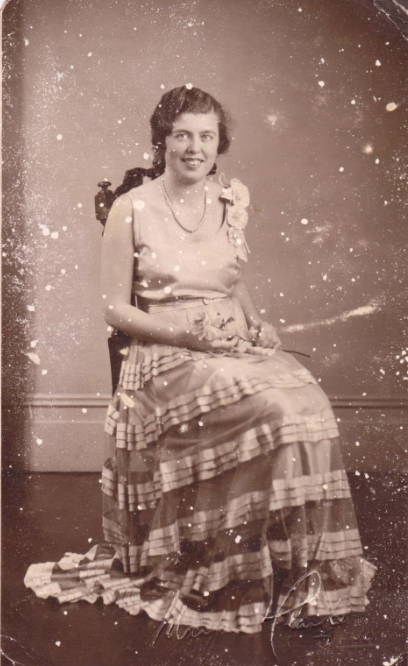 Those skills took Sue into the offices of the London County Electric Company in Wickford, where, in 1936, she met Alf, and a 50 year marriage and a family followed. The couple were married in Rayleigh but moved into ‘Carbis’ in Louvaine Avenue, Wickford, where the arrival of their children, Geoff and Marian, completed their family. 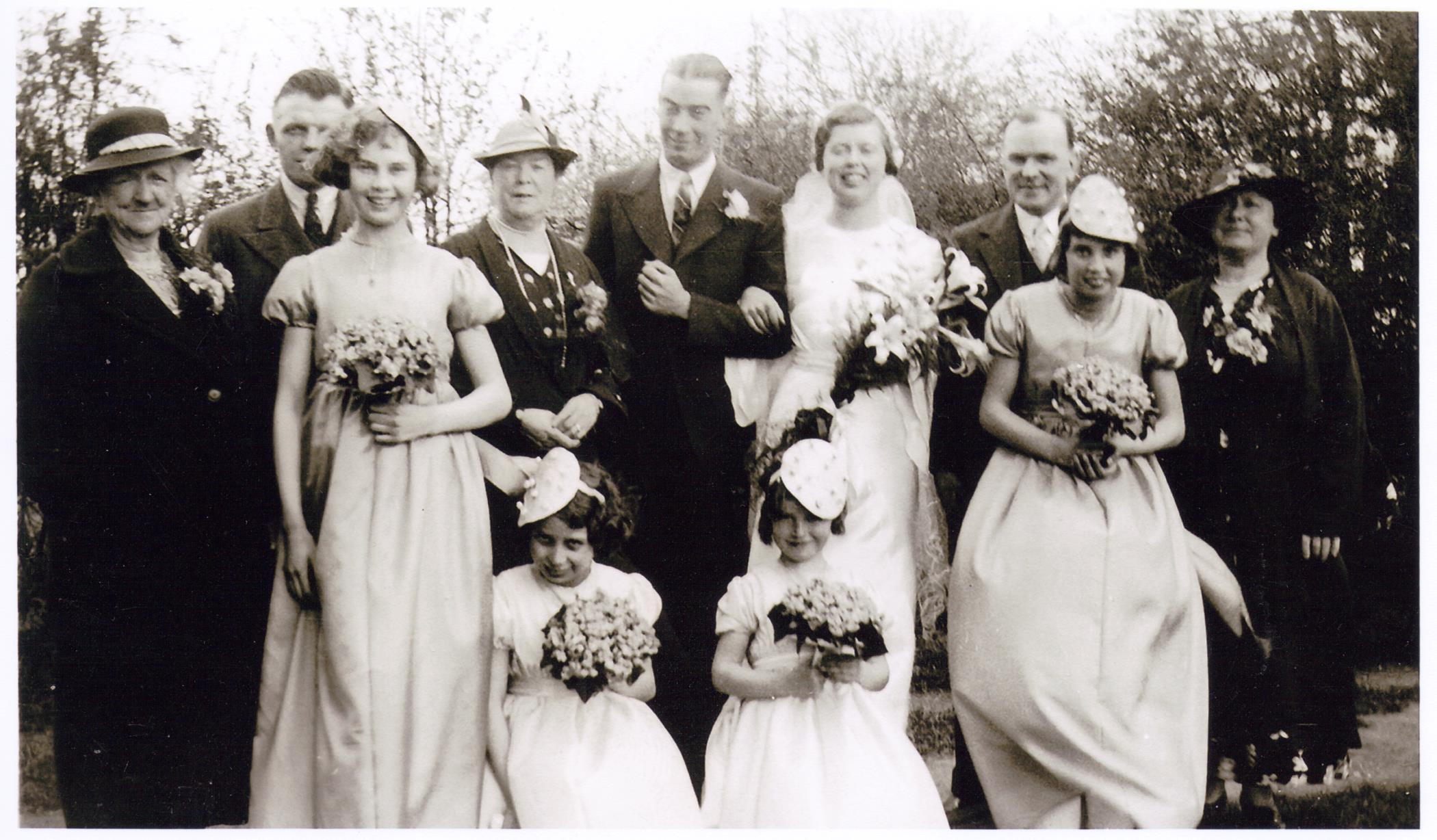 Alf Fairey had been born on 29th April 1906, in Alperton, Middlesex. His family then moved to Wickford just after the First World War and Alf became established as a member of the Wickford community. 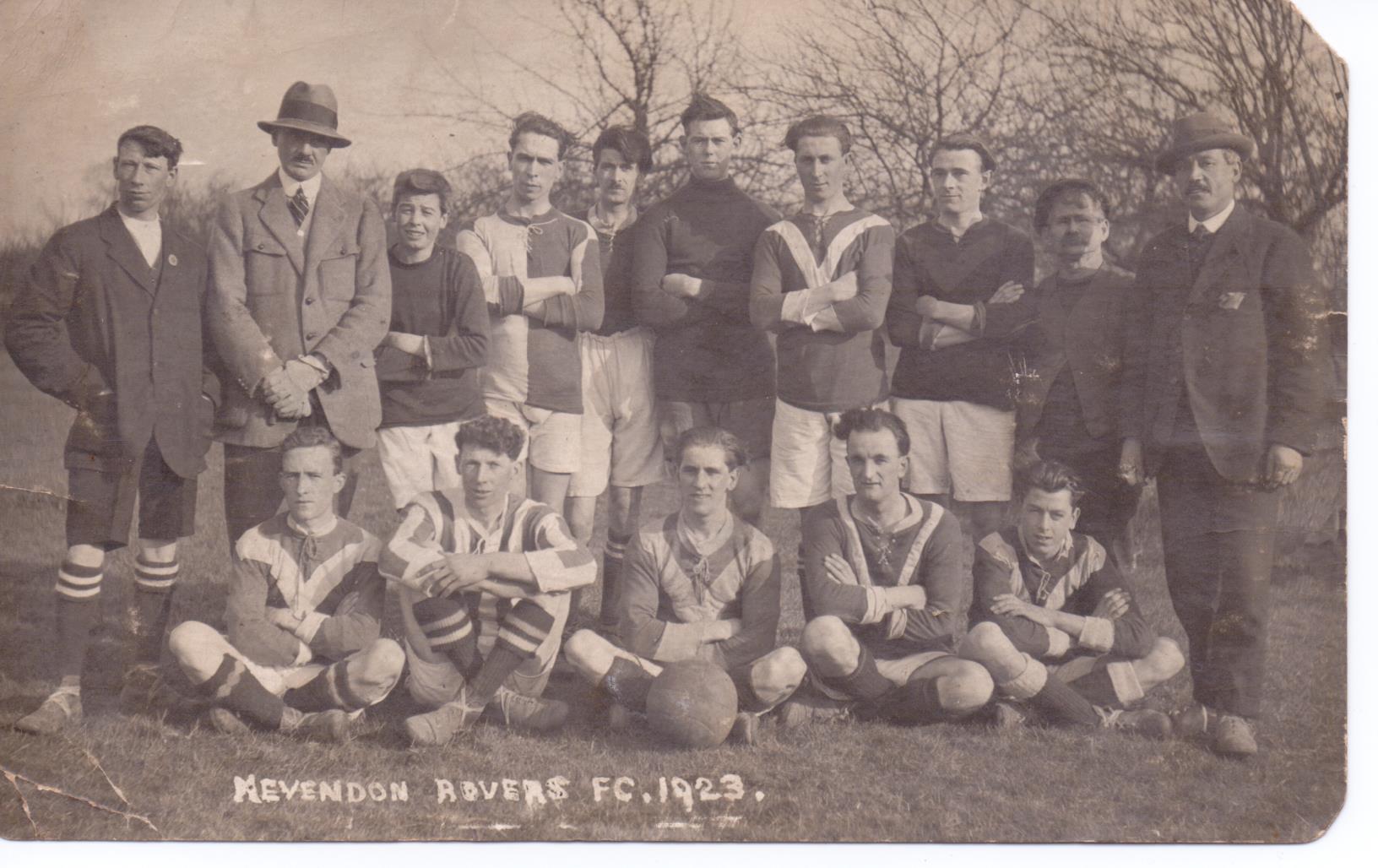 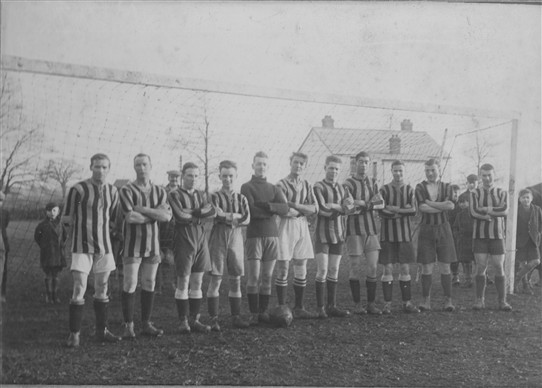 Alf’s father died in 1927. It is believed that he left behind a lot of debt and consequently the business was sold; it was both a wholesale and a retail newsagents and the shops were on The Broadway, later to become Adcocks, and a small shop close to the station. Alf then worked for the County of London Electricity Supply Company in the High Street, later to become the Eastern Electricity Board. He was there until moving to Ilfracombe. 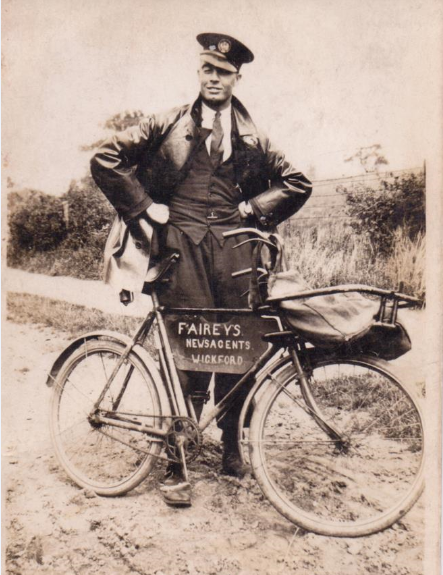 Late 1920s, Alf working in the family business. The business was sold about 1930. 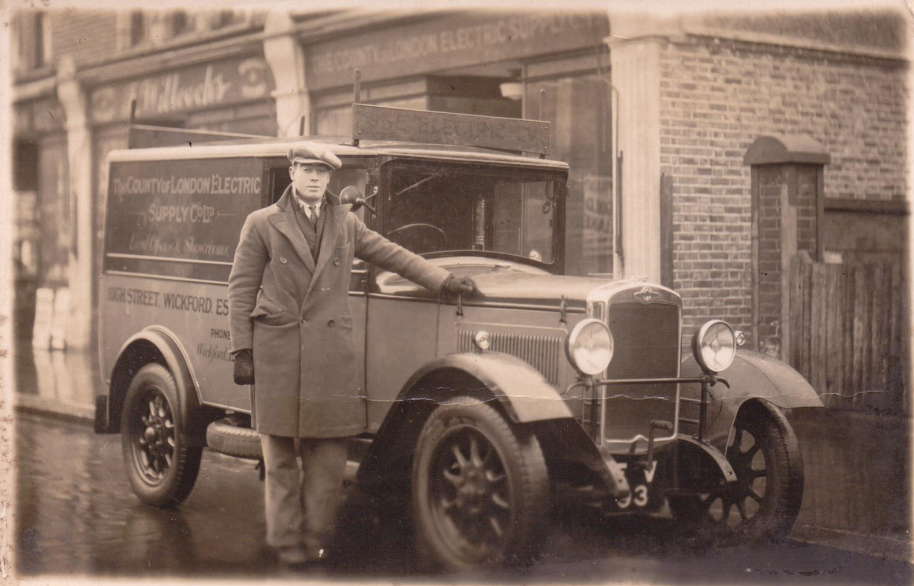 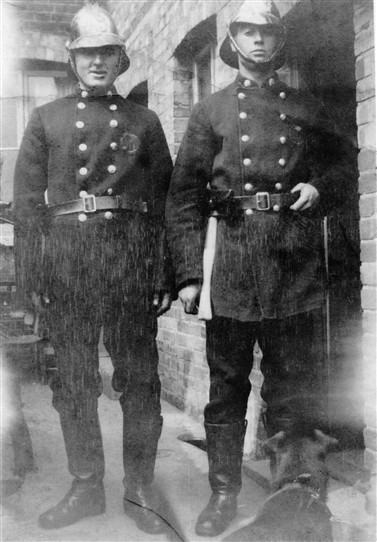 Albert Lovell, on the left, and Alf Fairey (brothers-in-law) in the Voluntary Fire Brigade during the Second World War.

During the Second World War tragedy struck the Fairey family when Alf’s mother, Alice, who was visiting her very pregnant daughter in Loughton, was killed in an air raid. Alf’s sister, Edie, was in bed when the bomb fell and survived the bomb blast, but Alice, who was standing by the bed, was killed.  Alice Fairey is remembered in the civilians’ garden in Wickford Memorial Park, on the War Memorial and in St. Catherine’s Church. She is buried in St Catherine’s churchyard. Edie lost the baby, and later came to live in Louvaine Avenue; she is in the V.E. Day photograph with her husband Bill. 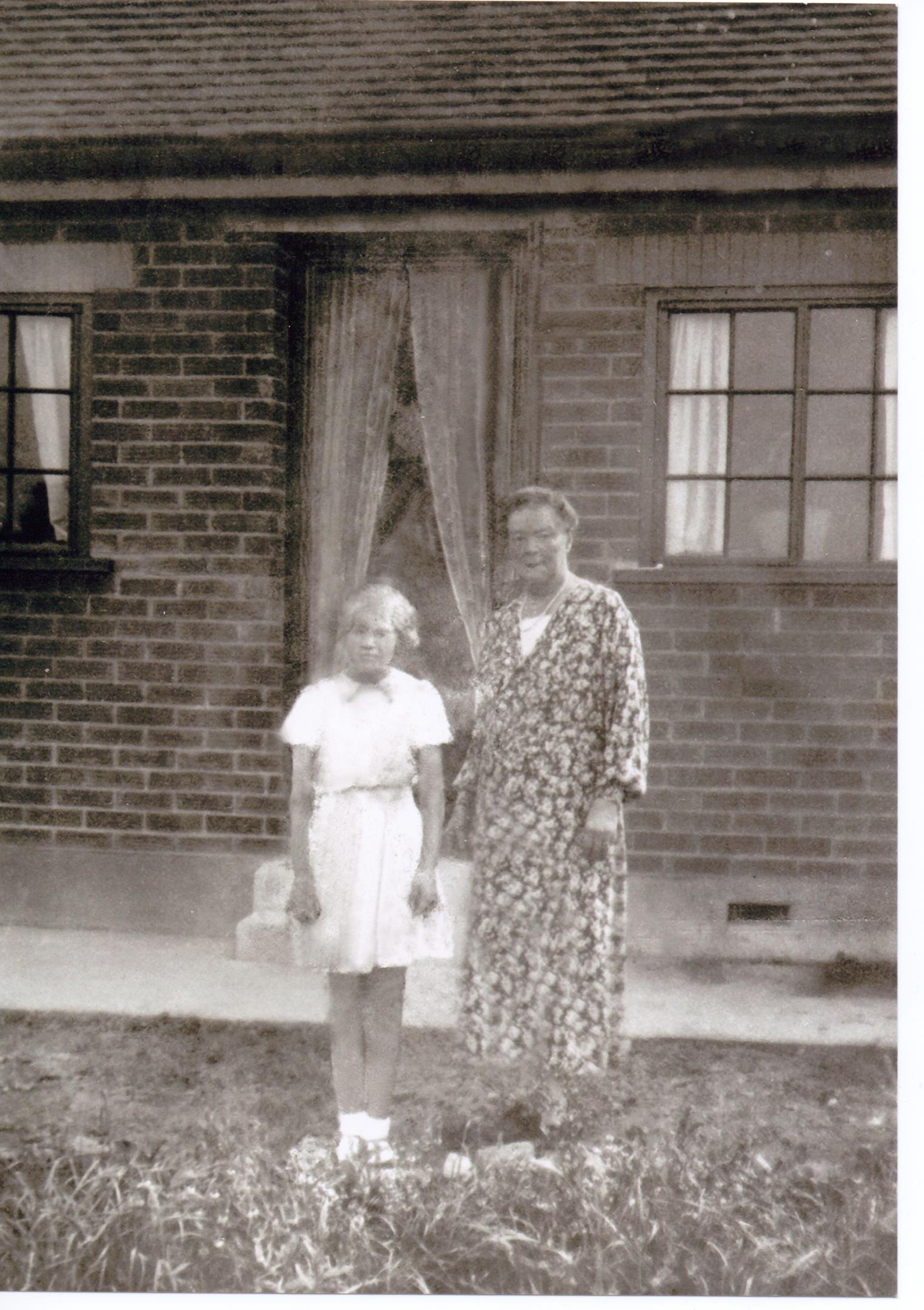 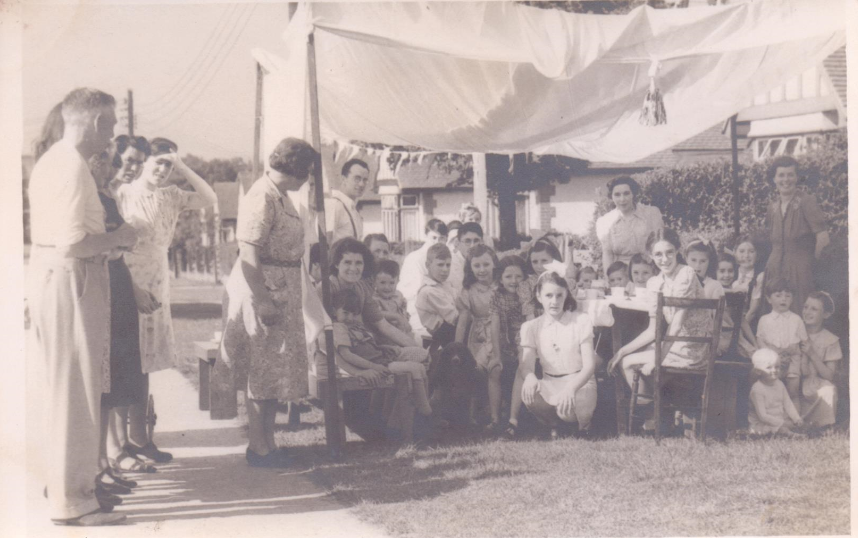 1945, V.E. celebrations in Louvaine Avenue. Sue Fairey is the adult on the far right.

Sue did not work when they were first married, but worked for Carter and Ward, in their office in Harold Gardens, from just after the war until going to Ilfracombe.

After the war, Sue and Alf and their family spent many weekends at Stone, on the Blackwater, where they built their own caravan. Silva Carter, of Carter and Ward, a long time friend of Alf, also built a caravan there, and they shared many happy times together. 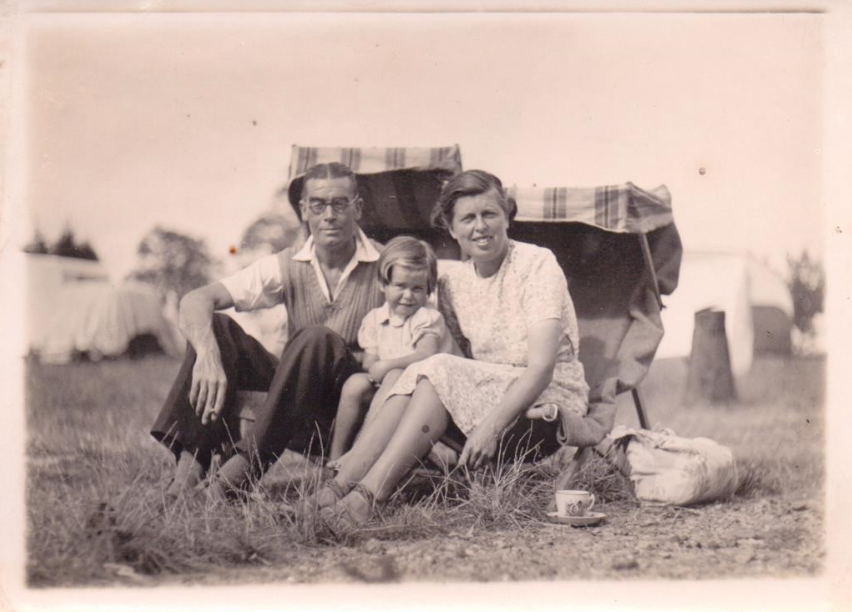 Alf’s other sister, Alice, was married to Albert Lovell (see the photographs of the Wickford Fire Service). During the war they had lived in ‘Clovelly’, Mount Road. They moved to Ilfracombe, via Southend, in 1947, to start a Guest House. Through them Alf and Sue were persuaded to follow, which they did in 1949. Their son, Geoff, is sure that they knew from the start that they had made a mistake and couldn’t wait to get back to Wickford, although by 1954 Sue’s parents had joined them, as did Edie. 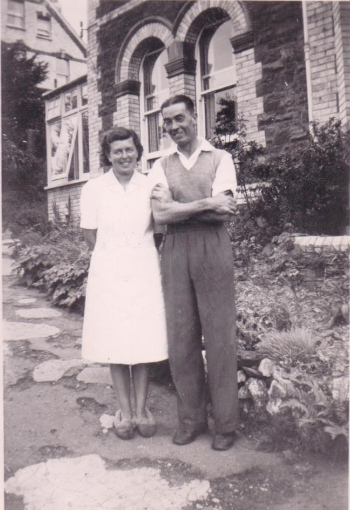 c.1951, outside the guesthouse in Ilfracombe.

Then in 1954 they moved back to Wickford. They came back to Wickford with nowhere to live, and stayed with some friends until they sorted out both a house and work, neither had any fixed plans. They went to Silva Carter with the idea of buying a house from C&W. At that time Carter and Ward had just started a company in Russell Gardens manufacturing concrete and clinker blocks. They were looking for somebody to manage the company and Alf was offered the job of Managing Director of what they decided to call Mercury Block.  Alf  knew nothing of concrete so went to Southend Municipal College for two years’ evening classes, taking a City and Guilds course in Concrete and Cement. On their return to Wickford, Sue worked as secretary to the estate agent Lewis Davies, and later for Harry Champion. She then worked for Mercury, in the office in Russell Gardens,doing the books etc. That expanded when Karrimix was formed and when Construction House was built both companies moved to the offices in Runwell Road.

They didn’t buy a Carter & Ward house, but instead bought a house in Nevendon Road, opposite the fire station. (It was flooded in 1958!) They moved to Vanda, Swan Lane, in January, 1965.

In an article on this website there is the story of ‘Three Wickford Men in a Boat’ in which Alf Fairey, Silver Carter and his son, Roy Carter, navigated the River Crouch from Wickford to the sea, in early 1960! Just to prove that it was possible. 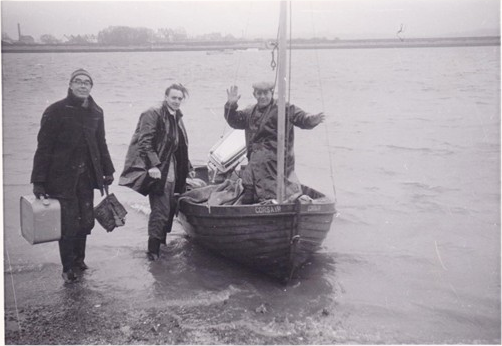 In 1963, Alf was Chairman of Wickford & District Chamber of Trade & Industry. 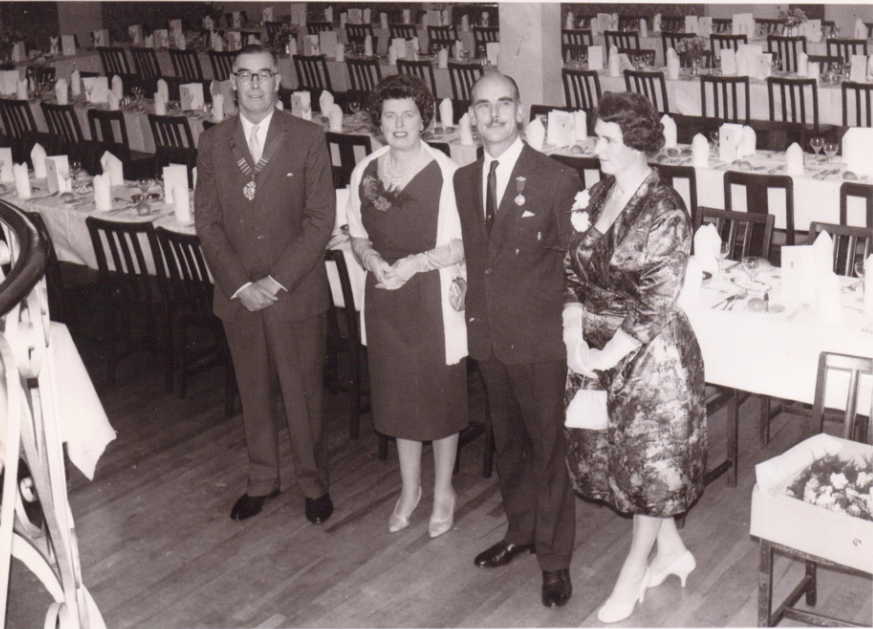 Alf died in 1985. Sue joined Wickford Inner Wheel (the sister club of Wickford Rotary Club, at that time for the wives and widows of Rotarians). At the age of 80 Sue became Inner Wheel President, and then repeated it in the year she was 90. 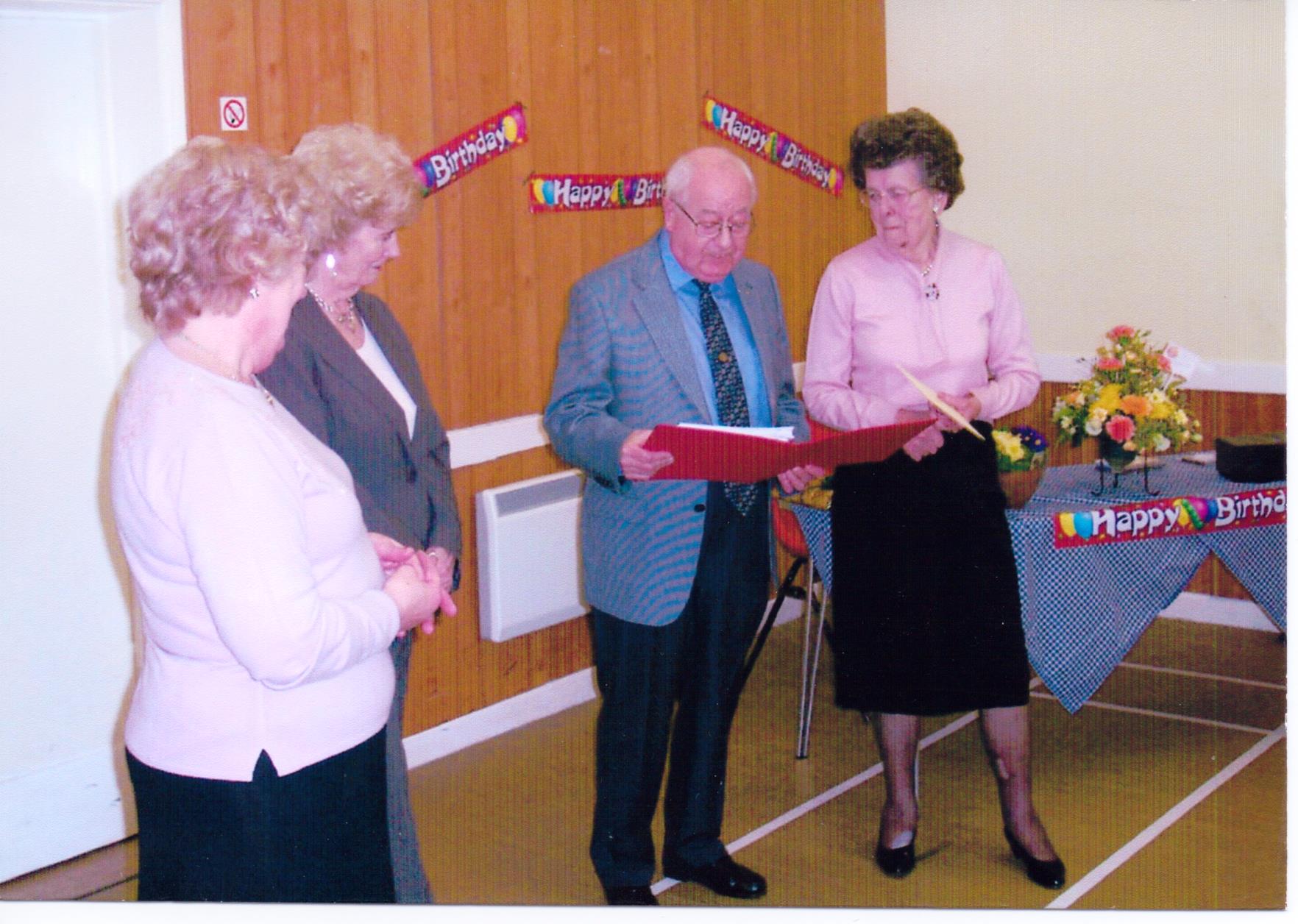 Sue at her 90th birthday celebration.

Photograph of Sue at the time of her 90th birthday. John Bolton was doing his ‘This is Your Life’ red book act, albeit much reduced at Sue’s request.

Inner Wheel members hoped that she would be President again when she reached 100, but she died in 2014, in her 100th year, after a short illness.

Geoff Fairey's memories and photographs of his parents.