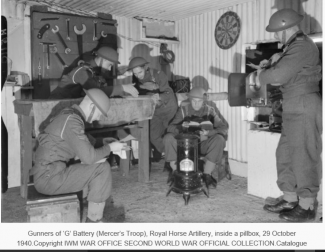 I am researching G Battery (Mercers Troop) 5 Royal Horse Artillery in 1940 after their return from Dunkirk. They manned the anti-tank guns on the GHQ defensive Line on the section that ran from the Thames up the East side of the country from Benfleet up to Saffron Walden. Their War Diaries at the time just make a passing reference to the Benfleet Area which may include Wickford.

Is there any further information of them during this period and would the pill boxes mentioned still exist? Any information would be much appreciated.

The Regiment is tasked with manning 21 priority positions between Saffron Walden and Witham (37 K as the crow flies!)

Clearing fields of fire, building emplacements and setting up road blocks prior to pill boxes being built and then occupy them as they became available. They formed part of the GHQ defence line.

HQ section mans pill boxes No.1-2 at Bowers Gifford and Southend by pass at Nevendon