You are here: HomenextTopicsnextTimes of warnextSilk Undies that arrived with a bang

Silk Undies that arrived with a bang 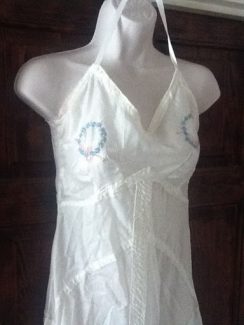 zoom
A close view of the underslip for a full length evening dress, showing the light blue and pink thread used in the embroidery, and the rib work used in the original construction of the parachute canopy. 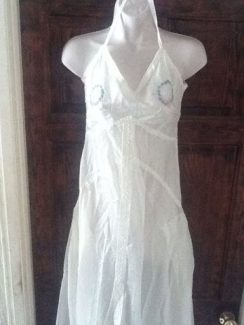 zoom
A souvernir of war times. 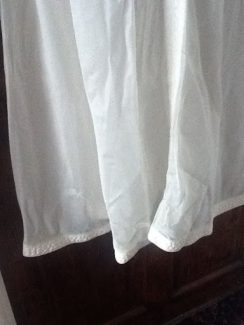 On the night of the 17th October 1940, two landmines were dropped in the area of Nevendon Rectory. One was an air burst above Frampton Farm and the Wilson family in their shelter felt the ground shake. The noise as the mine exploded was tremendous, and the house which had just had a beautiful stained glass window fitted which depicted a cow grazing and which had been made specially for his Father, according to Mr. Roland Wilson, and was his Father’s pride and joy, was trashed in the blast. As father and two sons, David and Roland, emerged from their shelter, various areas around the farm were alight. A young Roland grabbed the remains of the parachute mine’s green canopy. It was still alight so Roland extinguished the flames. Parachute landmines were usually dropped in twos and the other mine dropped on open farmland over towards the Southend Arterial Road (A127). Roland’s elder brother David was to find the off white cream parachute canopy from this mine and passed it on to his young cousin. At this point I should point out that on a visit to interview the said cousin, the lady presented me with a beautiful long evening dress under slip, manufactured by herself from the landmine parachute canopy. However the only way I was going to get it was if I didn’t ever publish her name. So out of respect for her wishes sadly the lady’s identity has to be withheld at this time. Practically everything during the war years and just after was put on ration. This included food, clothing, petrol. Clothing was particularly hard to obtain especially if you were a young woman. The landmine parachute or any parachute for that matter was greatly sought after as they were made of pure silk, even the guide ropes were platted silk twine, very soft. Ladies being ladies, if they could get their hands on a parachute it very quickly got turned into a variety of ladies’ under garments, silk slips, silk knickers were, I’m told, the most popular. As for the parachute chord, this was unpicked and the individual strands of twine rolled into balls. Then the girls would reknit the twine into dish cloths, nothing was wasted. Very hard to imagine today people having to perform such tasks, but seventy years on and those home made silk knickers and slips have long gone. But in 1994 when I conducted my interview with Roland’s cousin, I was presented with this very rare find, a full length under slip which would have gone underneath a lady’s evening dress. Acquiring this item wasn’t easy as the lady’s modesty stood firmly in the way, only relenting when I promised that I would display it without her name. Before I left I thought about asking if anything else of a similar nature had survived, but I thought, discretion being the better part of valour, I’d leave and be grateful for what I had. I have photographed this item and if I’m honest photography doesn’t do it justice. On the bottom hem can still faintly be seen numbers in black separating the panels and the reinforcing ribs that give the parachute canopy its strength. I think I can safely say that in all the years I have obtained gifted items of local history this evening slip, with it’s tiny waist and some light embroidering to make it even more feminine, is the nicest and most significant of a time now most young people today could not comprehend or understand, the simple hardship of having to go without or make do with what you had or could obtain.