You are here: HomenextPeoplenextOrganisationsnextChildren and young peoplenext1st Runwell Cubs and Scouts

There are one or two references on the 1st Wickford website about Scouts in this area prior to 1938/39. My husband and Roy Andrews remember the cubs meeting in the old stables at the old Runwell Rectory opposite the Quart Pot.

The Cubmaster was George Gregory who lived with his sister in the old black cottages opposite the Church. The Scoutmaster was Reg Payne, who lived at Briarbank in Ethelred Gardens, now on the corner of Merlin Way. Alan and Norman Simmons were ASMs (assistant scout masters). Akela was Mrs Peirce from Freshfields (now Greenways). Baloo was Mrs Payne (Reg’s wife). Rikki Tikki Tavi was Sheila Croot. District Commissioner was Bill Branch.

Roy remembers his mother had to order his cub green jersey from Alan F Helyer, the menswear shop that used to be next door to Halls Corn chandlers (now where Clarks shoe shop is situated).

Roy also recalls that Reg Payne served on HMS Bicester during the war which he thinks was badly damaged, possibly sunk and Reg was awarded the Distinguished Conduct Medal.

Our first meetings were held in a chicken shed in Reg Payne’s orchard at Briarbank. But our main aim was to have a headquarters of our own. To achieve this we held Jumble Sales, touring the district with a handcart to collect people’s jumble. We also collected newspapers which when sold brought in a little more cash.

The Annual Gang Shows held at Wickford Senior School in Market Road were another good fund-raiser. These were organised by Jimmy Allen. Everyone took part and a great deal of effort was put into the show. There were sketches, monologues, etc. Colin Tyrrell with his ‘Life gets Teejus’ went down well. The shows always ended with ‘Camp Fires Burning’. One of my lasting memories of the gang shows was Norman Simmons dressed as a ballerina dancing to the music of ‘The Sugar Plum Fairy’.

One year we put on ‘The Boy David’. One of the cast was David Dolman, who later married Mollie, who was well-known by the guides and brownies.

Another popular annual event was the Wickford and District Horse Show and Gymkhana held over the August Bank Holiday weekend, ending with a carnival procession along Runwell Road to a field opposite the Quart Pot with the funfair. Prizes for these events were displayed in the front window of Mayes Bros ironmongers on the corner of Jersey Gardens opposite The Castle Hotel (now Aldis carpark).

My father Robert Croot worked at John Sadd and Sons in Jersey Gardens and was given permission to drive their lorry for our scouts and cubs float. One year our float’s theme was Cowboys and Indians.

The first International Scout Jamboree to be held after the war was held at Belchamps in Hockley. My brother camped over with the scouts but the Cubs paid a day visit with Akela, Baloo and Rickki. This was an opportunity to meet scouts from all parts of the world. 1st Runwell hosted a scout from Latvia, who stayed with Akela at Freshfields, the present site of Greenways. It was very interesting to meet him and learn about Latvia. I wonder where he is now.

Many District events took place and these were held in Laindon. Phyllis Hickson’s father was vicar and he gave us permission for the field behind the vicarage to be used for outdoor activities. Boxing tournaments were held, I can only remember Len Boret who took part and was a good boxer. Phyllis later married Norman Simmons who was ASM for a time before starting 1st Downham Scouts with George Padwick. They held their meetings in an old barn at the Grange owned by Mr and Mrs Keddie, who sadly lost their sons during the war. 1st Downham Cub pack Akela was Sheila Croot. There were about a dozen boys. The Grange was a good area for tracking, etc. Once we had a trip to the Science Museum in London a good time was had by Cubs pressing all the different buttons.

1st Runwell Cubs visited Gilwell Park at Chingford where the Scouters went to obtain their Wood Badge. The Cubs had a great day out.

Another great day out was when we visited Greenwoods at Stock to see Her Majesty Queen Elizabeth, later the Queen Mother, who came to visit the East Ham Mission. Local Scouts from the County gave her a great welcome.

In the late 1940s a piece of land was purchased in Runwell Gardens and an ex-army Nissen hut which had to be renovated for our new headquarters. The scouts and a few parents worked with wire brushes to clean the corrugated iron sheets ready to cover them with tar.

At the 1st Runwell Scout Group Committee meeting, held on 21st March 1951, it was confirmed the builders had completed their work on our new headquarters. A clock was purchased by Mr Alan Simmons who also made arrangements for a plaque to be added as a memorial to Mr H. J. Allen. This was to be erected on an inner wall.

The next Jamboree was to be held in Austria and Denis Ketley was selected to attend, the cost of the trip was to be twenty five pounds.

The official opening of the group was to be held on 22nd September 1951 starting at 3.00pm. Scouts were to be stationed at Wantz Corner to direct visitors to Runwell Gardens.

The County Commissioner made his welcoming speech and unveiled a picture of the Chief Scout Lord Baden Powell. This was followed by Mr Pavey of the Local Association. Denis Ketley gave a report on his trip to the Jamboree followed by a Vote of Thanks on behalf of the group by Martin Peirce.

Games and refreshments followed plus a Talent Competition and a traditional Camp Fire.

Mr Fitt and Mr Jefferies, local reporters for the Wickford Times and Southend Standard were invited to attend and asked to include a brief report on progress, since the idea was thought up in 1939.

Fund raising continued with the collection of waste paper, Jumble Sales, Whist Drives, the Scout show and Fete, with the end of year Whist Drive and Dance.

During the year Billericay Urban District Council asked the Group to join with 1st. Wickford Group in a collection for The Lynmouth Flood Disaster Fund.

In January 1953 Egbert Gardens Coronation Committee asked for permission to hold their party in the HQ in return for a Donation. This was agreed. 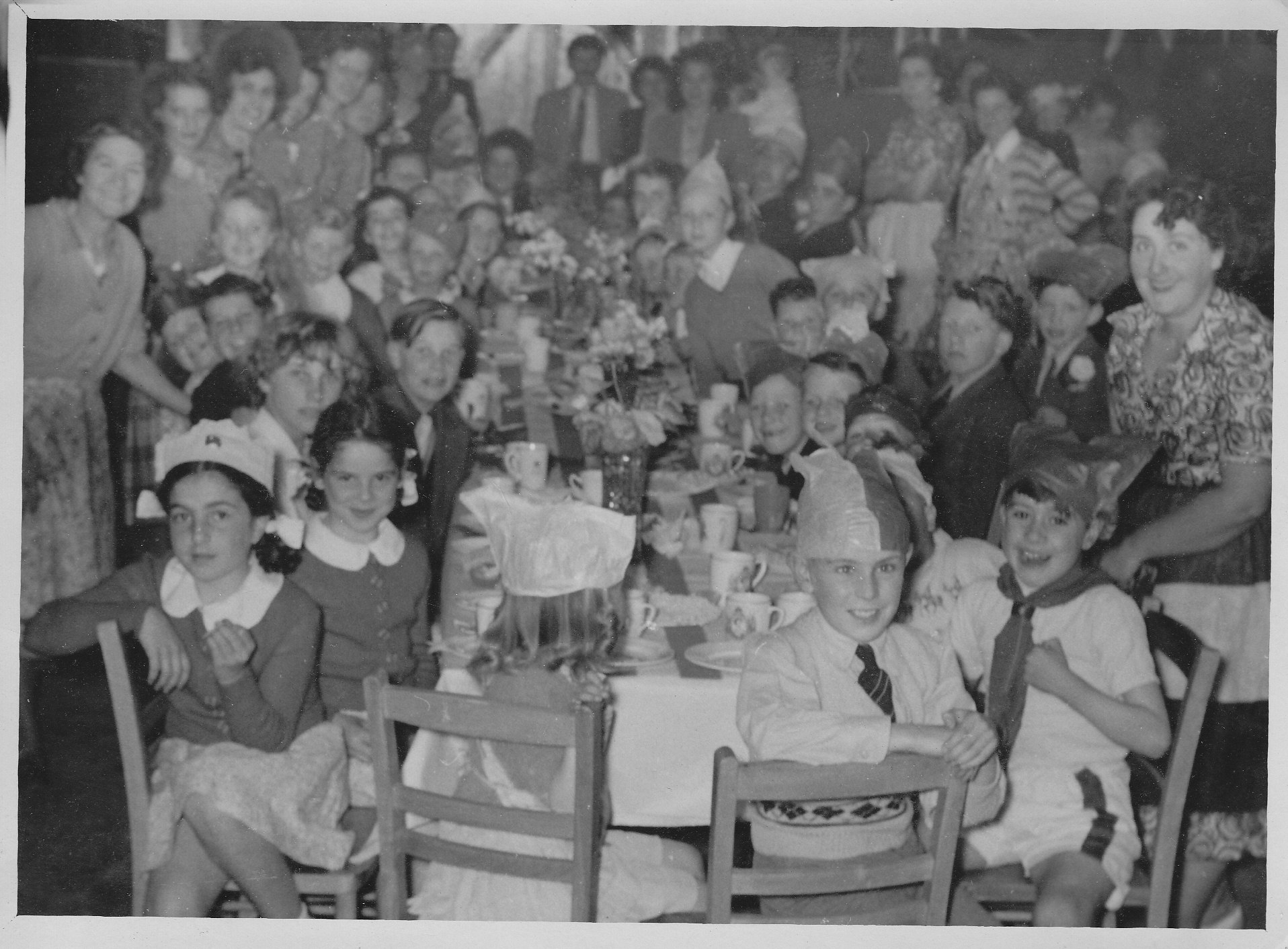 A Rover Crew was formed in May 1953 under the leadership of Mr Wall and a satisfactory visit was made to the LCC Fire Brigade HQ at Lambeth on 26th September 1953.

Bob-a-Job 1953 The Cubs raised a total sum of £24.8s.4d. This money was raised to pay our affiliation fees to Scout HQ in London with the balance to group funds for camp equipment, etc.

A Boxing Club had been formed, meeting on Tuesdays and Thursdays, two or three visits were made to the Laindon Boxing Club. Runwell scouts equipment was a punchbag and two pairs of gloves

A boxing tournament was planned at a later stage but due to the floor being concrete this was shelved.

In May 1954 Reg Payne announced he was unable to continue due to pressure of work. Mr Alan Simmons said he would take out a warrant as Scoutmaster.

The Rover Scouts were formed and on the 12th June 1954 they made a trip to the Houses of Parliament where they met the local MP Bernard Braine who showed them round.

Miss Webb, Captain of 1st Wickford Girl Guides, got in touch to say she was unable to take her guides to camp and was prepared to sell their camping gear. After inspection the sale was agreed.

The question of a Brownie Pack was raised early November 1964 and Mrs Gent kindly offered to run this with help. After discussion this offer was accepted.

Early in 1965 the Scouts ran a jumble sale to raise funds to start a Brownie Pack. Mrs Kingham, Akela of the Cubs agreed to help get things started and a donation of five pounds was made to help with badges, etc.

On the 20th September 1965 there was a bad fire at The Hut so it was now urgent for a new rebuild but costs were to be kept within a strict budget as the Group had no wish to go into the red.

Fund raising continued and successful outings to The Royal Tounament in London and The Gang Show in Chelmsford were enjoyed. During this time the Cubs and Brownies met at Runwell Youth Centre in Church End Lane for the next two and a half years.

It was agreed 1st Runwell Guides be formed 13th January 1969 with Mrs Gent as Captain and Mrs Tullis as Brown Owl. Mrs Gent remembers a Carnival Float featuring Japan, decorated with flowers that completely stripped her garden bare. It proved worthwhile as they won 1st Prize.

After Mrs Kingham moved away Miss Veronica Croot took over the Cubs until she had to retire in 1970. 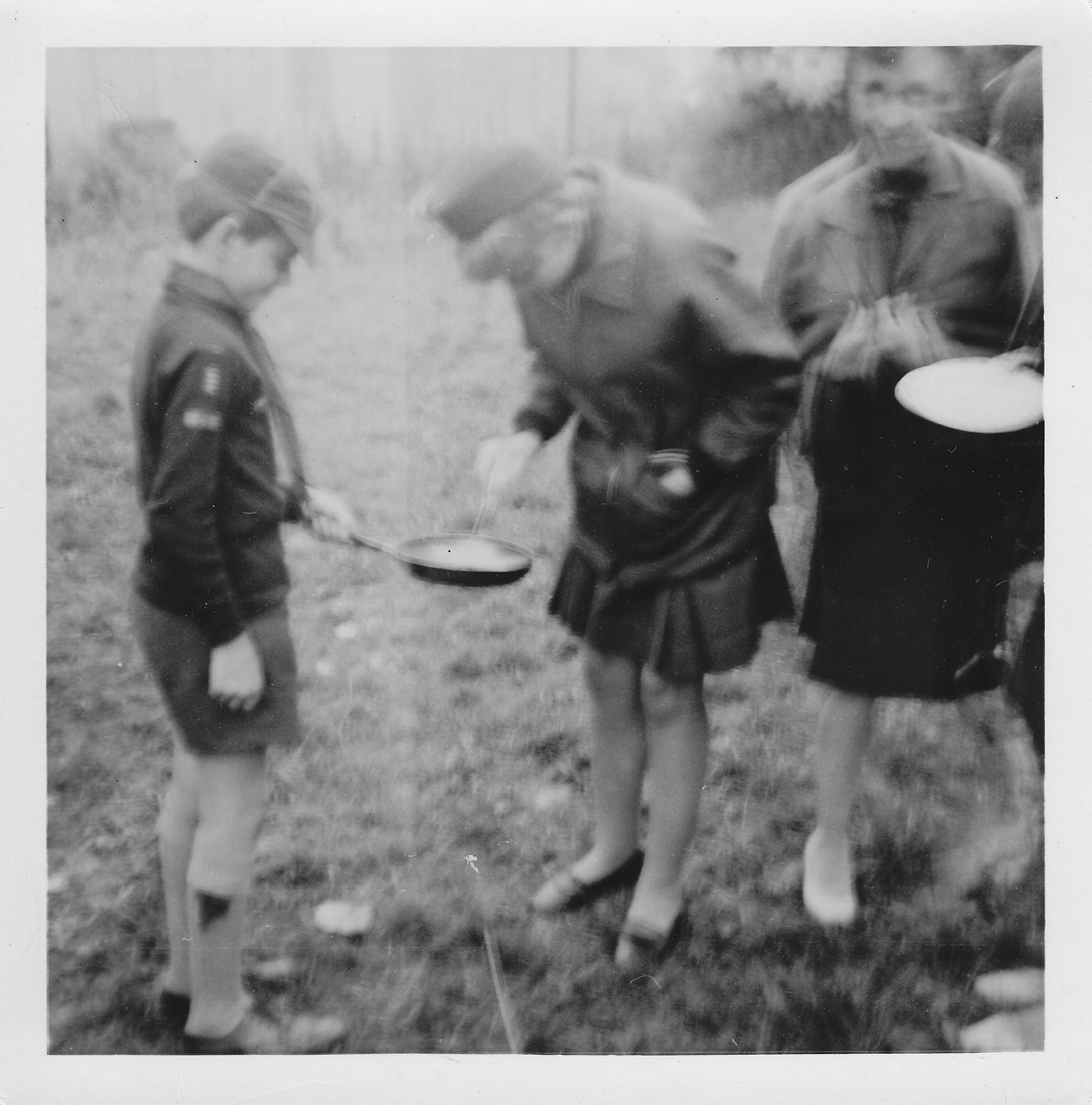 Veronica testing the sausages with Betty Brown by her side

Mrs Meg Abbot, Akela from about 1971, remembers another Carnival Float representing Mexico. They were all wrapped in blankets and it turned out to be a really HOT day. At this time the carnival procession met in Bruce Grove, Shotgate coming down Southend Road, through the High Street on to Nevendon Road near the Fire Station.

Meg’s husband Albert was the Scoutmaster and he obtained the Scout Badges on the Gates with help from his employers Hoffman Manufacturing Company. The Scouts also held regular St George,s Day Parades through Wickford High Street and Meg has kindly lent a photograph of this. She has also provided a photo of the Pack and their helpers. 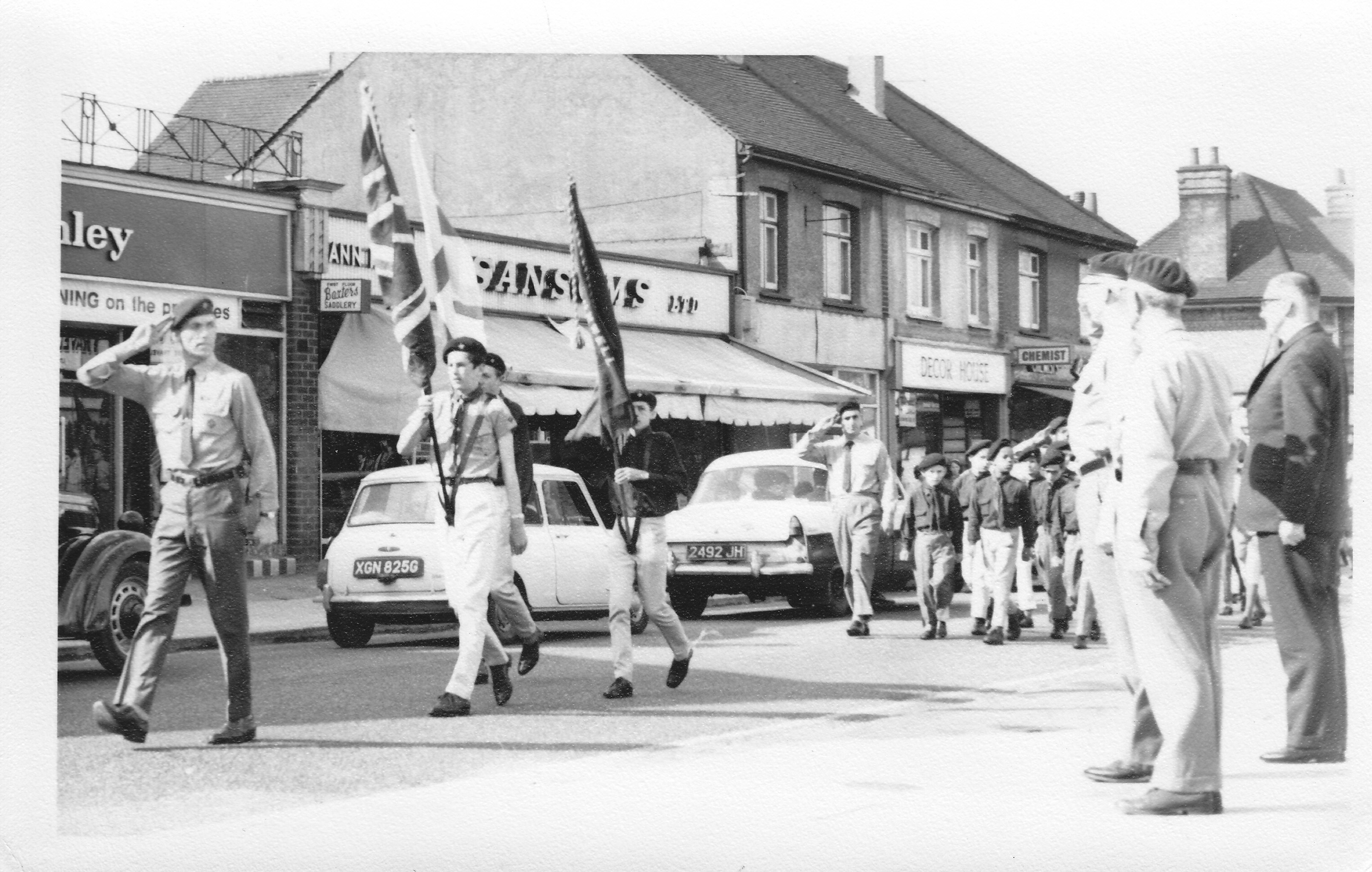 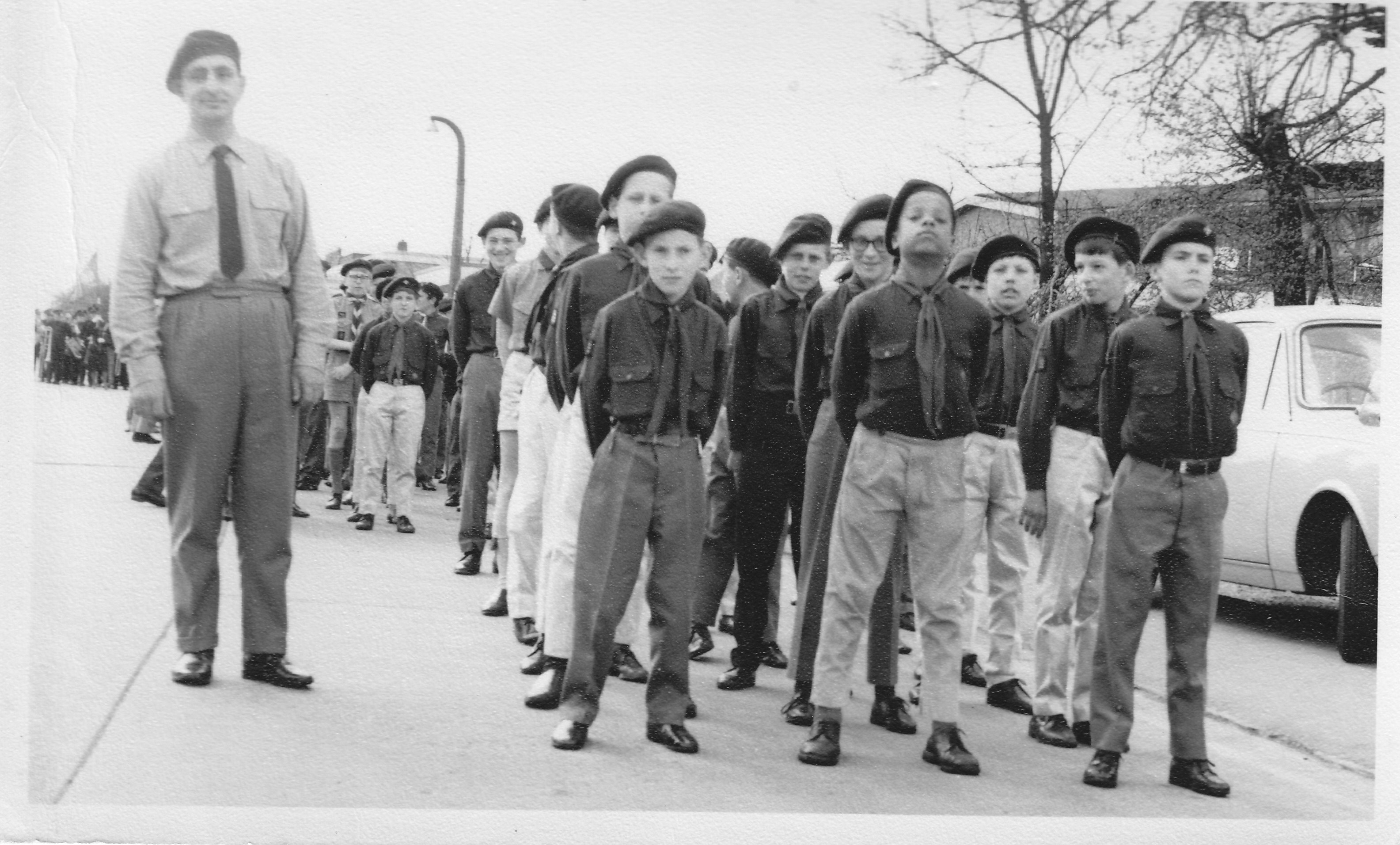 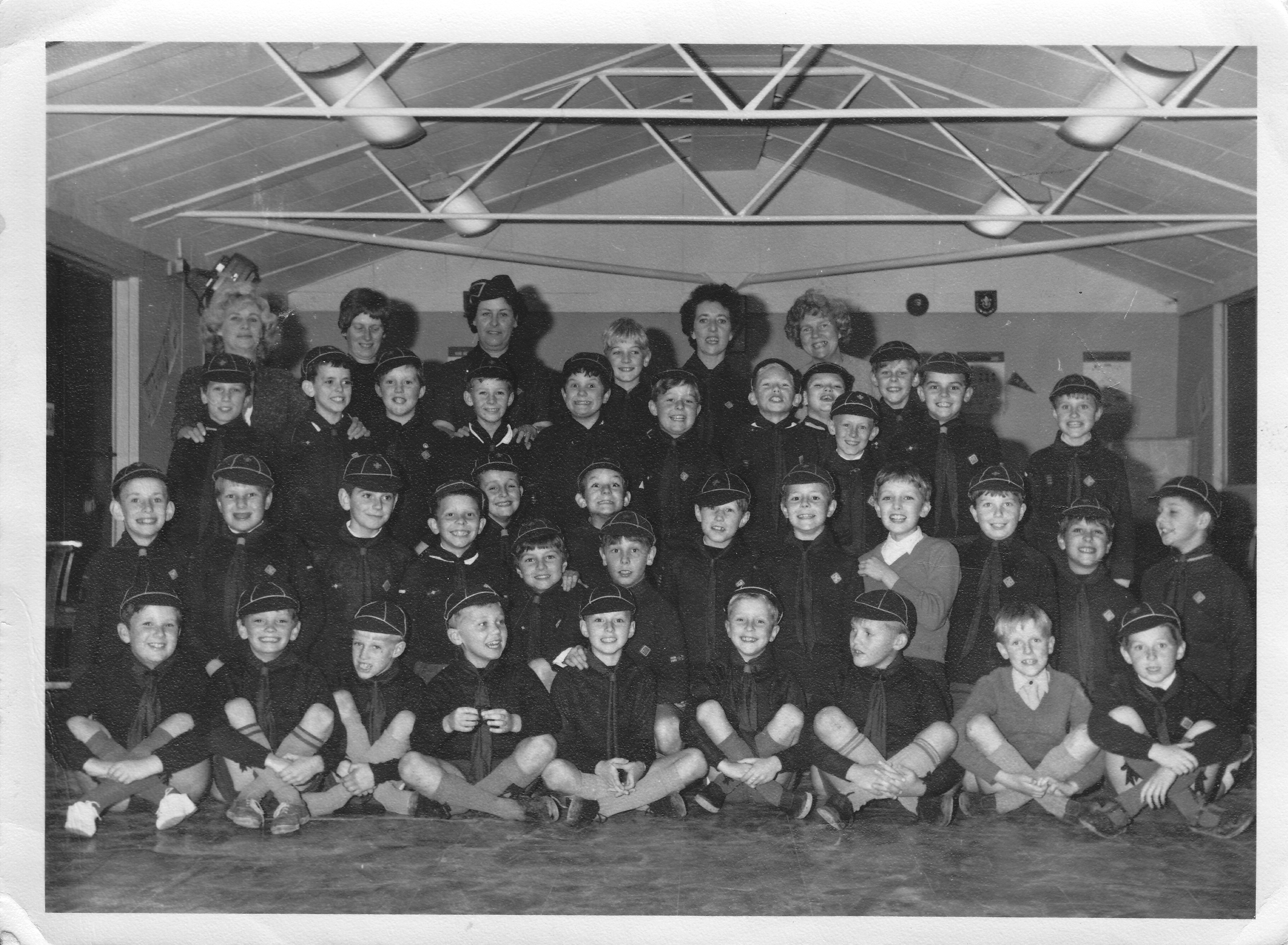 Bill Archer, who sadly passed away last year, took a group of Scouts to the 7th Essex International Jamboree from the 28th July to 7th August 1972. Photos, kindly lent by Mrs Jane Archer, show the Hand of Friendship carved by Bill on the Group sign. 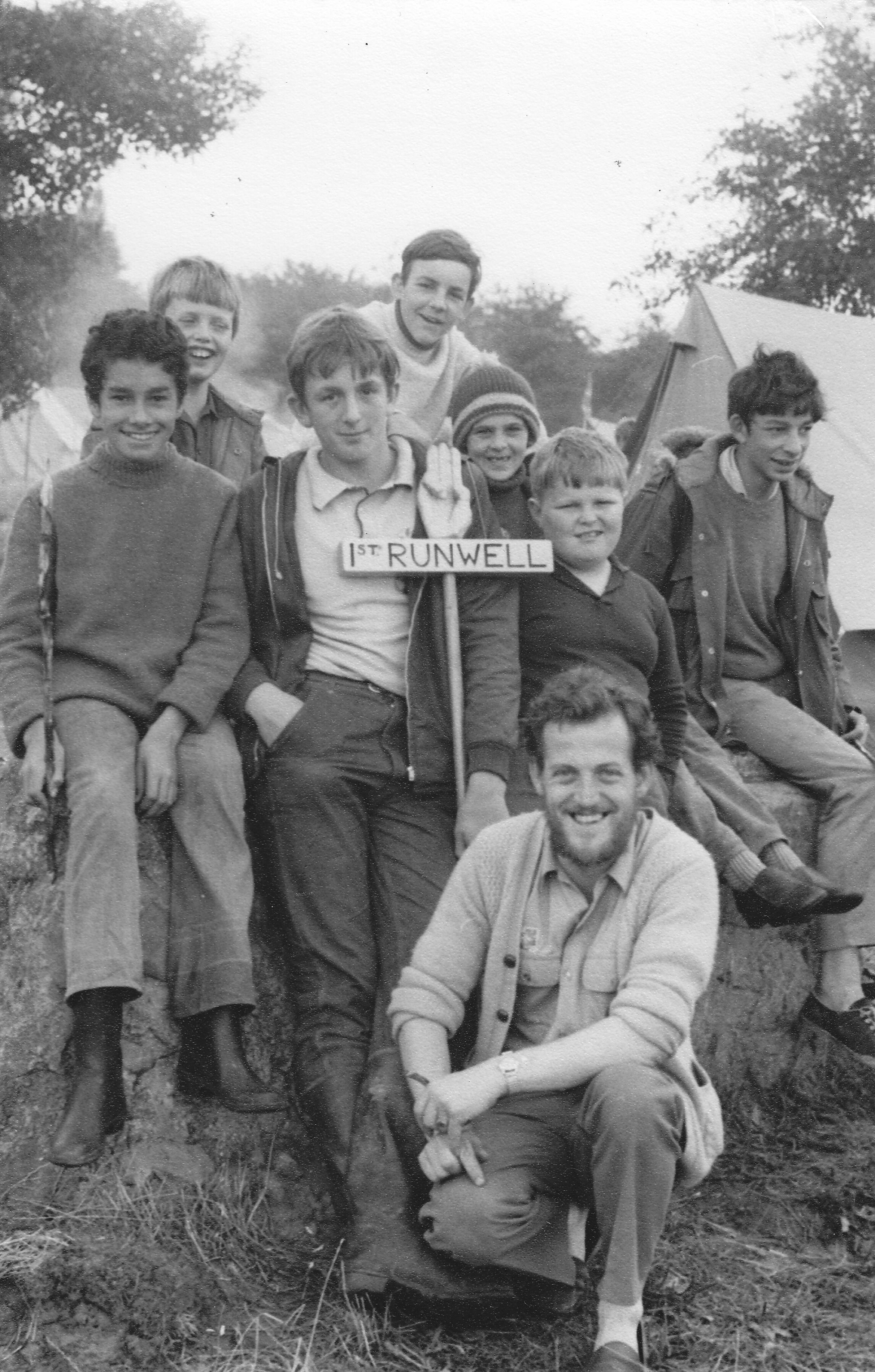 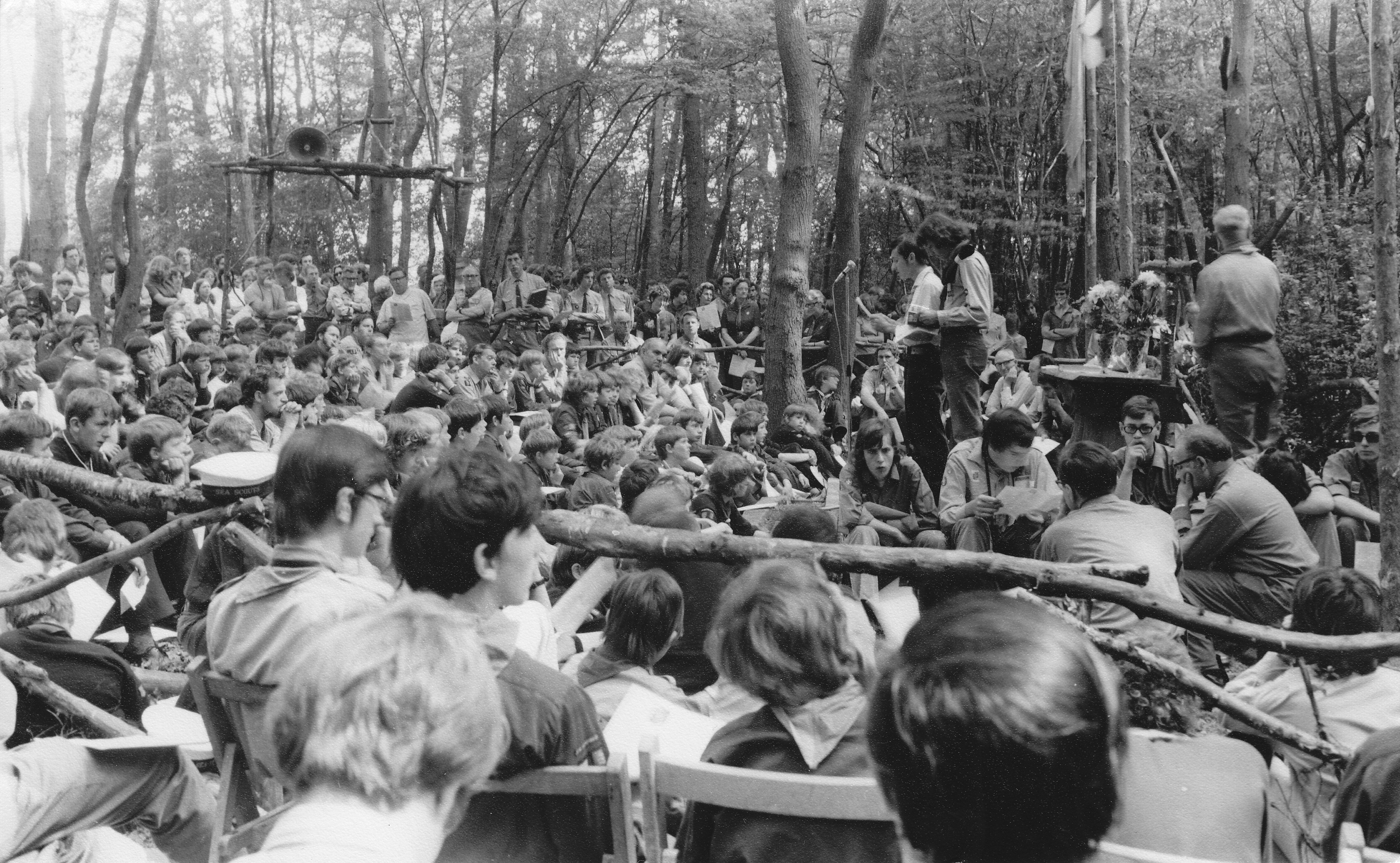 Chapel in the woods, Jamboree 1972 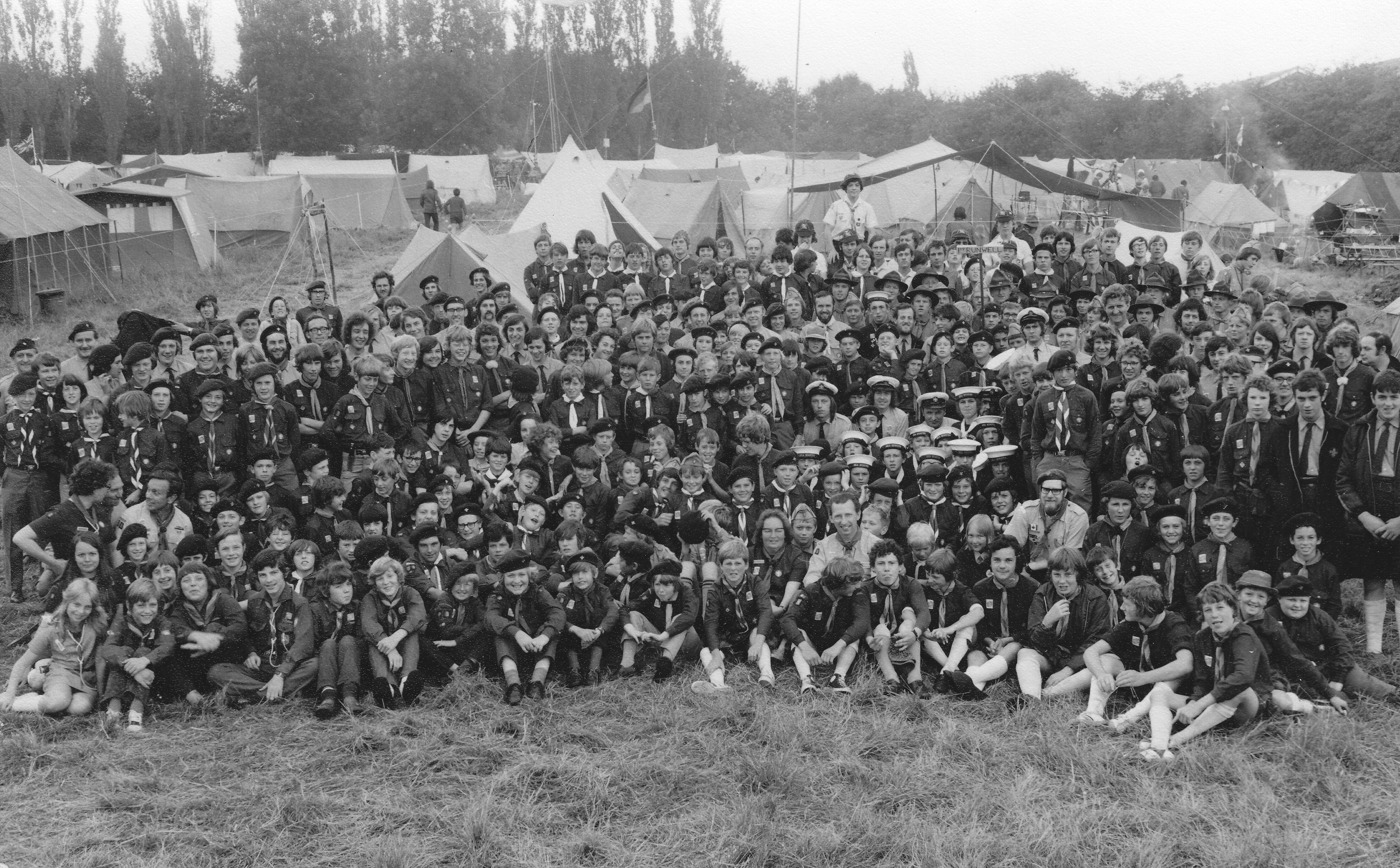 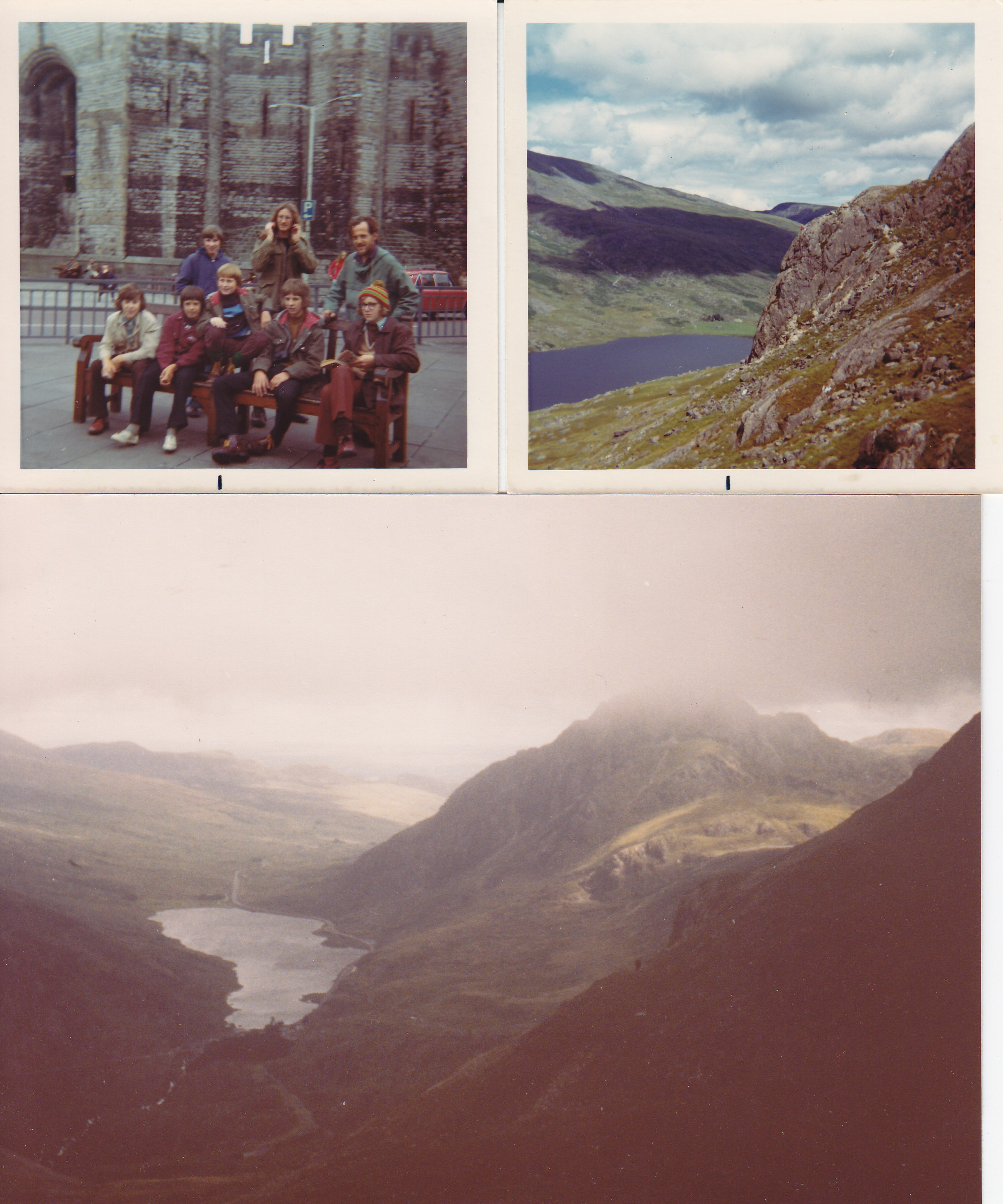 At the Inaugural meeting of the Parents and Supporters of 1st Runwell Scouts and Guides, Mr R Johnson took the Chair and gave a brief history of The Hut. This building is now held in trust by The Scout Association and cannot be sold for building if the Scout Group should cease to exist.

The Constitution of The Association was then considered and after lengthy discussion with two or three amendments was accepted on 10th June 1975.

Following my offer to help with the History of the Runwell Cubs and Scouts I did not realise sixty years later my brother’s grandson attended the 2007 Centennary Jamboree at Hylands Park with scouts from South Woodham Ferrers.

Whilst taking part in the Jamboree, Scouts from other countries helped with local projects one of which my husband and daughter spoke to a scout from Finland.