A story of the Trust formed after the First World War. 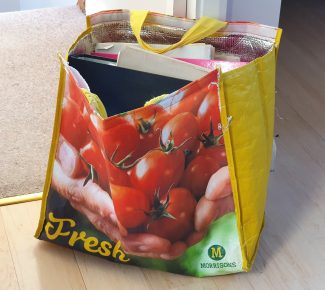 zoom
The carrier bag containing a rich assortment of documents about the story of the Trust fund set up after the First World War. 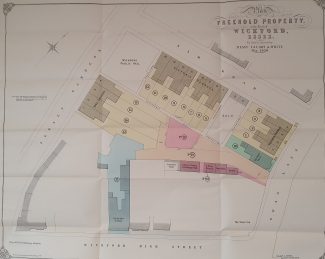 zoom
A map showing the property sales of 1920, set up by James Gigney. 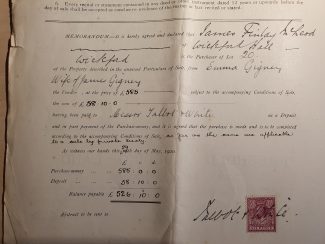 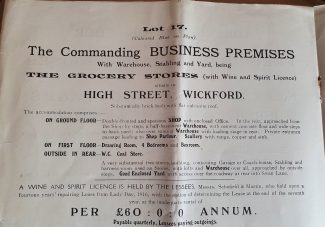 zoom
The brochure describing the features of James Gigney's shop for sale. 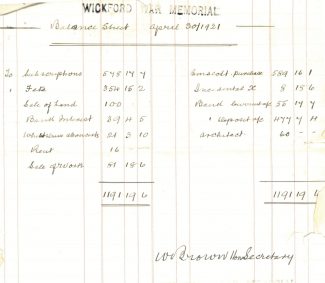 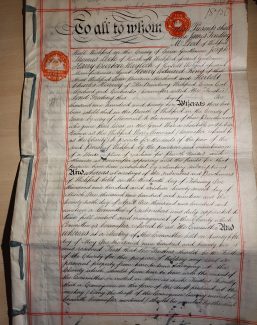 zoom
Very difficult to read, this is the hand-written front page of the Trust Deed set up on June 13th 1922. 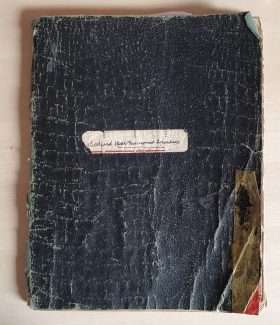 zoom
After a hundred years of existence, the Trust minutes book is showing its age. 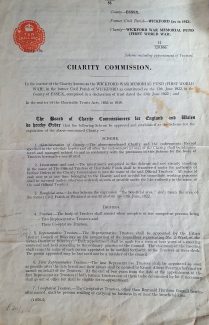 zoom
In 1953 a new Charity Commission scheme was set up, with the continuing aim of providing for the poor and needy of Wickford.

When I became Treasurer of the Rotary Club of Wickford, I was handed, amongst other things, a carrier bag. A Morrisons’ Carrier bag. It stood in the corner of my office for two years until earlier this year when I opened it up to find out what was inside.

As is mentioned in Steve Newman’s articles on the War Memorial, the original War Memorial in Wickford took the form of a Nurse’s Home, housed in a bungalow situated in Southend Road, which was subsequently demolished to make way for the bypass in 1976. The documents we hold chronicle some of the events in the creation of the Nurse’s Home and what happened after that.

Wickford lost little time in planning for a war memorial to commemorate those who never returned from WW1, and the first meeting to discuss it took place on February 13, 1919 at the Public Hall, just a few months after the end of the War

By the summer of 1919 it had been decided to acquire some land and build a Nurse’s Home, to provide free accommodation to a local nurse, and, as a result, to provide local medical care to the population. This was, of course before the time of the NHS, and medical support was hard to come by. However, it appears that at some point, the idea of building a home from scratch wasn’t going to be practical.

The following year James Gigney, who owned property and a shop in Wickford, commissioned an auction of sale of properties in the town, on 17th May 1920. As I think is shown elsewhere, his shop appears to have been a double fronted building on Broadway, about where Maplefords the carpet shop is now.

The properties he was selling were terraced cottages, a lot of which still exist, in Swan Lane, Elm Road and Jersey Gardens, along with this shop, all of which had sitting tenants so there was a rental income associated with the properties. The auction took place at the Wickford Public Hall, which I discovered elsewhere on this site was on the corner of Elm Road and Jersey Gardens. Ancestry tells me that James Gigney was 66 in 1920, and died at 84 in Rochford, so perhaps he was retiring and selling his property to fund his retirement.

The brochure gave full details of each property which was up for sale, with details of the property and of the sitting tenant, and what he paid in rent, on display to the public. So much for GDPR!

While most of these properties were around the area of Jersey Gardens, Swan Lane and Elm Road, there were a couple of others; a plot of land on Swan Lane for building, and in addition a bungalow called Emscott, which never actually made it to auction, because James Finlay McLeod, of ‘Wickford Hall’ purchased it on behalf of the War Memorial Fund, in advance of the auction.  ‘Wickford Hall’ still exists as a private house, and is in Brunwins Close, but is now converted into flats.

‘Emscott’ was let to a Mrs. V Franklin for £2 per month, and her lease was due to expire in March 1921. James McLeod agreed to pay £585 for the bungalow, and it appears that he bought it in his own name initially, although with the money from the War Memorial Fund. Perhaps he did that because the War Memorial Fund probably wasn’t an official organisation at this time with its own bank account. ‘Emscott’ cost £589/16/1d to buy, and we have the cheques to prove it! Now, while the sale was for £585, there was a provision that the purchaser was required to take the two concrete flower vases which were in the front garden for £5, so presumably James Macleod haggled the price on those down to £4/16/1d!

It isn’t clear exactly when the bungalow was up and running as a Nurses home, but on June 13th 1922 the War Memorial was created as a Trust, so it was an entity in its own right. On the same day there is also a deed of conveyance which transfers title of the bungalow from James Mcleod to the Trustees as a collective.

The grand opening was in July 1922, by which time the nurse’s home was fully set up, and had marble tablets installed in the porch to commemorate the people of Wickford who were lost in WW1.

Joseph Leete had lost his son in WW1, and his name can be seen on the marble tablets that were once in the porch of the nurse’s home, and are now on the new War Memorial. Searches of some old OS maps shows that ‘Hurstcroft’ was initially a 30-acre site abutting Wick Drive, Hill Drive, George Road and Wickford Avenue which I believe was around where Radwinter Avenue is now.

The provisions show the aim for the Trust to be to provide for the needs of the poor of the said Parish of Wickford by the provision and maintenance of a house or place of residence for Parish Nurses, although there was another provision, which was the relief of the poor in the Parish.

The next source of information comes from the Trustees Minutes book which survives from September 1925, when James McLeod and Harry Haylock both resigned as Trustees and were replaced by Robert True, a tailor, and Seth Franklin, a butcher, both of the High Street. At which point the minutes book jumps to 1929.

In 1929 donations were made as a result of a sports fete in July, and a Garden Party held at ‘Hurstcroft’ in August. Costs that year included repairs done by Sam Carter, and A Baxter, a plumber, and the purchase of a new Valor oil stove.

At an informal meeting at the house of Dr Frew in 1930 a loan of £25 was made for the motor car for the nurse. I’m not sure if it was the same nurse and the same car, but in 1938 Trustee Mr. Harvey paid off the outstanding loan of £20/11s, so I’m guessing that the nurse had only paid off £4/9s of the debt over 8 years

In 1938 a letter was received from the British Legion to complain that some of the names on the marble tablets at the War Memorial were illegible.

In 1939 there was trouble with the toilet cistern on December 29, and plumber Mr. Coxhead was called into fix it, and to enclose the cistern in a wooden box filled with sawdust….

In 1941 there was a damp problem in the nurse’s home. It was decided to defer the issue until the summer months…

All through this time the funds were often around the £100 mark, and it is clear that the Trust was in some difficulty. In 1944 the Trustees undertook to pay for the insurance themselves rather than the Trust pay for it.

In 1945 Carter and Ward quoted for repair work to be carried out to the property, but in the end Easton the builder was instructed. Clearly Carter and Ward were too expensive….

In 1947, the Trust received a letter from the then nurse saying that her daughter was getting married, and would not have a home of her own, and asking if she could make a home for her daughter temporarily. After taking legal counsel the request was turned down.

In 1948, the Trustees started considering how best to deal with the War Memorial under the National Health Service Act of 1946, which would render it redundant. The decision about whether to rent or sell the bungalow to Essex County Council was referred to legal counsel and also the Charities Commissioner. The idea of using the funds to build a Public Hall for Wickford was mooted. I am guessing that as the Public Hall in Jersey Gardens still existed, albeit a little flimsy looking with a corrugated iron roof, they were looking to create a more substantial building. However, the Commissioner’s stipulation was that the funds needed to be used for the purposes of the original Trust, “to provide for the needs of the poor of the said Parish of Wickford”. This clearly rankled with some, as it was pointed out that “today there are no poor in Wickford” as it was understood in 1922 when the Trust was instituted, and that a Public Hall would be of great benefit to all classes…. They took this point back to the Charity Commissioners. But it clearly got nowhere.

Long story short, they sold the bungalow to Essex County Council in 1951 for £1300 and bought Defense Bonds and War Stock with the proceeds, and then to put the interest on deposit until such time as any deserving causes came about. A new Charitable scheme was set up with the Charities Commission in 1953 with the application of income for the Relief of the Poor.

From 1957 it appears that they did start making grants.

In 1958 the Trustees contacted the Women’s Voluntary Service and Wickford Friends of the Aged asking for details of people who had suffered in the floods of September that year. The WVS submitted some names and five grants to the total sum of £45 were made.

In 1962 the Trustees discussed the suitability of funding what they called the Rotary Chalet Scheme. (Wickford Rotary Club had purchased a small chalet at The Stone – now called St. Lawrence – at which poor families of Wickford could be provided with short holidays). Later that year it was concluded that the Scheme itself did not qualify for grants, but individuals making use of the Scheme could qualify under their own right.

The funds were now down to about £300 and it was around this time they started considering putting money into the COIF – Charities Investment Fund.

By 1964 when the minutes in the book end, they were finding it difficult to get a quorum of Trustees at meetings, but grants did continue to be made for many years through to 1970, mostly to organizations such as the Rotary Club, the British Legion, Beauchamps School who were requesting funds on behalf of individuals.

In 2012 the suggestion was made that the War Memorial Trust Fund should be merged with the Rotary Club of Wickford Trust Fund, and this was actioned on 1st March 2013.

The last grant from the fund was made in 2013 to Wickford Salvation Army to purchase a shed for storage of goods for the Wickford food bank. It was judged to be in keeping with the original Trust aim “to provide for the needs of the poor of the said Parish of Wickford”