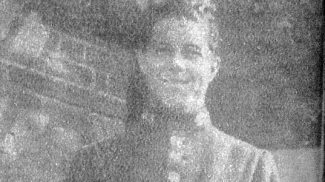 Pc 861 William G Burnett was a Wickford village Police Officer.  He joined  Essex Constabulary on 1.7.1911, was recalled to the Colours (which suggests he was a retired Soldier or Sailor) on 4.8.1914 and was killed in action on or about 29.10.1914.
The Essex Police Memorial Trust has the following

William George Burnett, the son of George Burnett, was born in Chichester, Sussex in 1891. He lived with his parents and two sisters at 105, St Pancras, Chichester.  On leaving school he enlisted with the Coldstream Guards.  It is understood that when enlisting he recorded his name as George Burnett and indeed it would appear that this was the name he preferred to be known by.  Following his discharge from the army he joined Essex Constabulary on 1st July, 1911, recording his full name William George Burnett.  As Police Constable 493 he served at Brentwood before being posted to Wickford where he was a keen member of the Wickford Cricket Club.

At the outbreak of war, in August, 1914, he was recalled to the colours and as Lance Corporal 7591 rejoined 1st Battalion Coldstream Guards.

The 1st Battalion Coldstream Guards was one of six Battalions of Guards that went to France with the original British Expeditionary Force, crossing the Channel between 12th and 17th of August, 1914.

Together with the 1st Battalion Scots Guards, 1st Battalion Black Watch and 2nd Battalion Royal Munster Fusiliers they formed the 1st Guards Brigade of the 1st Division and were commanded by Brig-General Ivor Maxse.

The 1st Battalion Coldstream Guards had little involvement in the retreat from Mons, however, they formed part of the rear guard of the division on 27th August and formed the infantry of the advanced guard of the 1st Division when the Allied Armies turned and advanced on 6th September.  Having crossed the Petit Morin and the Marne they were not seriously engaged till 14th September, the day after crossing the Aisne. Having struggled up the wooded Vendresse valley and taken positions along the Chemin des Dames they came under continuous artillery fire and sustained heavy losses.

The History of the Guards Division in The Great War records:-

‘Lt-Colonel Ponsonby eventually collected the equivalent of about a company of his men and continued the advance, penetrating about a mile within the enemy’s line and occupying a very forward position beyond the village of Cerny.  Then followed some confused fighting in the fog that was very thick.  For a time the Guards were able to hold their own, but in the afternoon a heavy counter-attack, in which eighteen German battalions took part, was launched against the front held by the 1st Division. The Coldstream, Scots Guards and Cameron Highlanders made a gallant resistance and attacked in their turn, but the enemy’s pressure was too great and they were eventually obliged to relinquish their forward positions.’

The 1st Battalion Coldstream Guards lost 11 officers and 350 other ranks during this days fighting.  One soldier who was taken prisoner by the Germans was Joseph Farmer a former police colleague of William Burnett.  Farmer, who was made to work in the front line on the Eastern Front, died in captivity on 15th April, 1917 and is buried in Latvia.

The 1st Battalion Coldstream Guards were next in action on 21st October during the First Battle of Ypres.  They went into the line advancing in a north-easterly direction towards Koekuit.  Some progress was made but repeated attacks by the German infantry, together with intense artillery fire on 22nd and 23rd October, checked the advance and brought the battle of Langemark to an end.  The 1st Coldstream Guards had suffered 200 casualties.

The Guards were relieved by the French on 25th October and the following evening moved to a position north of the Menin Road.  Between 26th and 29th October the Coldstream Guards and the Scots Guards were under relentless artillery fire that was as effective as it was persistent.  Casualties were heavy and the Coldstream Guards were greatly reduced in strength.  Early in the morning of 29th October the Germans attacked in strength along both sides of the Menin Road and broke through the British lines at Gheluvelt crossroads inflicting further losses on the Guards who fought with splendid determination and prevented further progress by the enemy.

The War Diary of the 1st Battalion, Coldstream Guards records:-

29th October, 1914 – GheluveltHeld trenches. Attack by the German’s beaten off at 5.30a.m. in dense mist but was successful further South, East Southeast of GHELUVELT.  The result being that the Battalion trenches were shelled immediately afterwards from the right rear.  A retirement appears to have been ordered and a small portion of the Battalion re-formed covering the East side of GHELUVELT village on the South side of the YPRES- MENIN road covering a battery of the Royal Field Artillery.  At night Battalion withdrawn into Brigade Reserve between HOOGE and GHELUVELT.

William George Burnett, who was a single man, 25 years old, was initially reported as missing in action on 29th October, 1914, but was later presumed killed on that date.  His body, if ever recovered was not identified. When darkness fell on that day there only remained 80 men of the 1st Battalion Coldstream Guards.  William is remembered with honour and his name recorded as Burnett G on the Menin Gate which forms the British Memorial to the Missing who fell at Ypres or in the neighbourhood.  A total of 54,896 are recorded on this memorial.  Shortly after he had been reported as missing, in October 1914, his mother died.

Just six days before his death his words, in a letter, to Superintendent Cowell at Brentwood ‘I am well’ had been printed in the Essex Weekly News.

On 20th March, 1915, the Southend Telegraph reported ‘The fate of PC Burnett, of the Coldstream Guards, is still a mystery. He was called up at the outbreak of the war and no news can be got from any source about him. The death of his mother in October caused his relatives to write to his Commanding Officer, who replied that he was missing on October 29th and nothing had been heard of him since.  The War Office has also been appealed to, and they say their belief is that he was wounded about that time and is now a prisoner of war.’

On 1st March, 1916, the Chief Constable reported to the Police Authority: – ‘Pc Burnett, on active service, has been missing since October 29th, 1914 and the Army Council have accordingly informed his family that they have concluded he was killed on or after that date.  Constable Burnett was unmarried.’

On 12th December, 1918, the Southend Standard reported ‘The sad news has also reached Wickford that PC George Burnett who was stationed at Wickford for three years before the war was killed in action in France on October 29, 1914.  He, with others, joined up soon after the outbreak and was at first reported missing and for over 2 years nothing further was heard until just recently. He was much esteemed in Wickford.  During his stay he was connected to the Wickford Cricket Club.  He was a native of Chichester, Sussex.

On 7th July, 1922,Wickford Nursing Home was opened and two marble plaques were mounted either side of the main door recording the names of 29 men from Wickford killed during The Great War whose families had subscribed to have their names added. Unfortunately the name of William Burnett was not included on this memorial.  In 1976 the nursing home was demolished to make way for a bypass and the memorial plaques were remounted and placed at the entrance to the Second World War Memorial Park in Wickford.

On 4th November, 2011, thanks to the efforts of the Wickford War Memorial Association a new memorial commemorating those from Wickford killed during both World Wars was unveiled.  As a consequence of the research undertaken by Steve Newman of the Wickford War Memorial Association William George Burnett, former police officer of Wickford, is commemorated on the memorial as G. Burnett, the name by which he was known in the area.

William was commemorated on the Downham War Memorial located outside St. Margaret’s Church, Downham but his name was wrongly recorded as G. Durnett.  On 6th February, 2013, again thanks to the efforts of the Wickford War Memorial Association, this memorial was rededicated following work undertaken to correct errors including the amendment of William’s name to G. Burnett.

It is a credit to all concerned that there is tangible evidence that William George Burnett is still being remembered nearly ninety-nine years after his death.

William is also commemorated as Burnett George W. on the Chichester War Memorial in the town of his birth.

We are the Dead.  Short days ago We lived, felt dawn , saw sunset glow, Loved and were loved, and now we lie In Flanders fields. Major John McCrea (Died Wimereux 1918)