From an old newspaper cutting

Bert Spencer and his early days in Wickford. Bert Spencer commented, “When I was a boy my Dad gave me a penny a week pocket money and always said, “Don’t waste it”. Now I see children who have several pounds pocket money eating ices on their way to school. I wonder if they are as happy as I was.”  The difficulty of telling Bert’s story is that his life has been so full that it’s difficult to know what to leave out.  “It was in 1911 when my father bought the land off Irvon Hill for £100″  he started. “He built a weekend cottage there as we were living in Manor Park. The timber at that time cost 3d a foot and was really good – not like some we have to use today. Not knowing anything about flowers he grew vegetables, which we tried to sell locally. It was not until about 1920 that the family moved to Wickford and my younger brother, Harry, went to the Church School in the Southend Road. Bert remembers 1920 very clearly, “It was the summer when the temperature rose to over 100 degrees.” A neighbour at the time was Obediah Halstead who owned Bridge House Farm, where stands Bridge House Close. “It was a 500 acre farm and his labourer was reputed to have the largest head in Essex, as big as a wurzle basket, they said it was.”  Mr Spencer remembers all the old families of the area. “There were the Bayes brothers and the English family. And of course the Carters and the Wards. Old Mr Ward was the blacksmith who looked after our pony. And there was Mr Ruffhead who ran the Livery and Bait Stables”. He continued by commenting that the only garage was in the High Street and that all repairs were carried out in the centre of the road. “Bob Jepson was the saddler with a shop near the railway bridge. He was nice and handy for the cattle market which was held each week, in addition to the poultry market and the odds and ends market.”  Mr Spencer’s real love is for flowers, for which he is noted. As you enter his house the first thing that you see is a giant date palm which he grew from a stone from a packet of dates. “I am told that it is one of the very few date palms that has ever been grown in this country. It grows all the year round. Wickford World famous for growing Bananas Part 2 of Bert Spencers story. Always one for trying something new and particularly if it seemed impossible, Bert Spencer’s father, Harry, was famous for many of the products grown in his greenhouses and nursery and so it was perhaps not too surprising when he announced that he intended to grow bananas for sale. In 1928 refrigerated ships had not been introduced to world trade and fruit could not be expected to arrive in perfect condition; if anyone could grow bananas commercially it could be a paying proposition. A tropical house was built on land to the side of Irvon Hill, heated at the then enormous cost, often shillings(50p) a week. A rooted sucker was obtained and Bert and his father planted and tended the plant with all the care and attention possible. No one had done anything like this before. “We were considered cranks”, Bert continued. “My father decided that we would consider the banana scheme as a paying hobby – not just a commercial venture. He was a man who appreciated publicity so,when the plant grew and a crop of fruit appeared, he wrote to the News Chronicle. Quickly other newspapers heard of us and pictures of the plant appeared in most of the national papers”. According to Bert there are fourteen different kinds of bananas “The one we grew in Wickford was the Musa Cavendish, a type grown in the Canary Islands”. The main bunch held 186 fruits and some were sold to greengrocers in the town. Hands of Wickford-grown bananas were sent to a number of well known people, including George Bernard-Shaw. In reply to the gift Shaw wrote to Bert Spencer commenting upon the fruit which in their unripened state were green and hard. Obviously he had difficulty in peeling the fruit and wrote.  At no time did it look, taste, smell or behave like a banana. You have produced a new species, but he continued by congratulating the growers on what he considered a remarkable feat. Shortly after all the fruit had been picked, two ladies arrived from Woodford, having travelled by taxi. Even though we showed them the plan,t which was about nine feet tall,,they would not believe us. They could not understand that fruit grew on a plant. A cinema newsreel company also called about this time and we had to pretend to be picking bunches of fruit – but it was the same bunch every time. Letters were received from as far as Australia from people who had read of the activities of the Spencer family in such well known publications as then Strand Magazine. 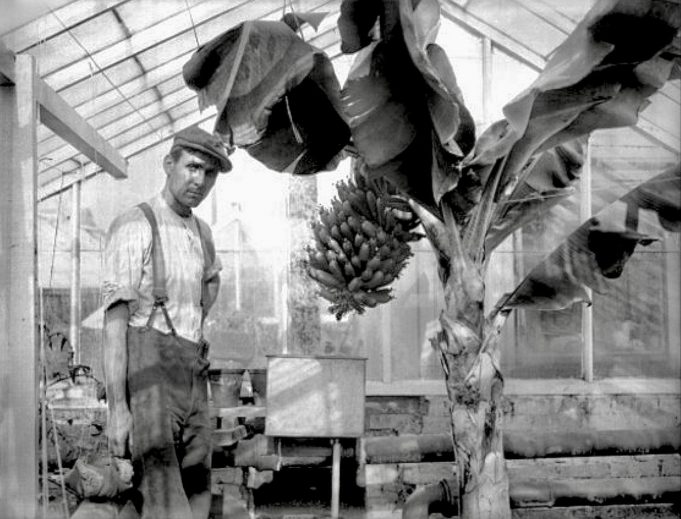