You are here: HomenextBuildingsnextChurches and their communitiesnextReligion in Wickford: St Catherine's Church and St Andrew's Church 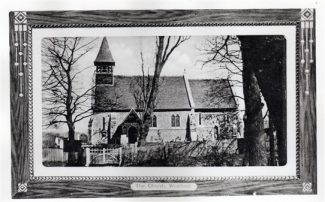 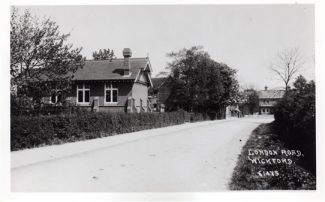 Religion is one of the things that conveys a sense of continuity to the history of Wickford. It is not clear when the first church appeared on its present site on the hill along the Southend Road. The site is near to a major Roman settlement at Beauchamps. As an easily defendable site the Normans may have had a building there. Christianity seems to have been well established in Wickford by 1154 AD. The building immediately preceding the present one may have dated back to the 14th century. This church had a timber belfry and steeple, a gallery at the west end and a vestry on the south side of the Chancel. Two bells have been retained from this church. Cast in 1460 at the London Foundry of Keble they are amongst the oldest in Essex. Each has an inscription: “Sancta Katerina : Ora : Pro : Nobis” (Saint Catherine : Pray for us is one and “Sit Nomen : Domini : Benedictum” (Blessed be the name of the Lord) is the other. By 1528, if not before, the Church was dedicated to St Cecilia, the only church in Essex to be so and the bell is the only indication that the church might have been dedicated to St Catherine.

The first incumbent we know of was Adam de Stratton (1279-92). The Wickford Church was attached to the Priory at Prittlewell until Henry VIII’s argument with the Catholic Church and the dissolution of the monasteries. Between 1456 and 1548 there were only six rectors, all of whom died in office. In 1551 the Church passed from the control of the crown and the patronage of the living was retained by various local families, such as the Lord of the manor at Stilemans’s. A visitation in 1565 found that the “Chancell windowes”  had become decayed and needed repair.

In the 17th century Wickford came to be associated with “revolutionary” Presbyterianism. When the puritan revolt swept Charles I away it also led to the removal of Cornelius Gray from the living in Wickford in 1645. He had spoken out against the Parliament which replaced him with Thomas Lake on August 30th. Lake was immediately replaced by John Banning who unfortunately died in 1646. In that year the Prayer Book was abolished and replaced with the Directory of Public Worship. Gray was reinstated to the parish but died in 1647 when Nicholas Bound became Rector. He was succeeded by Robert Percivall who conformed to the Act of Uniformity, essentially an agreement to work according to the Prayer Book, thus ending a period of religious unrest.

In 1685 Archdeacon Turner visited. He found that the Rector had repaired the Chancel and built himself a house. A new translation of the Bible and a lockable chest was required. However he also noted that the communion table needed a new napkin, the wall under the steeple needed repair and the others needed whitening. The wooden floors by the pews needed repair and the stone floor needed levelling. The churchyard was full of rubbish.

The Rectors seem to have had pleasant accommodation, namely “A Mansion House surrounded with a Mote”. (This is now located in St Charles’ Drive and has been converted into flats). Also within the moat was a garden, an orchard and a dove house. There was also a barn,  a stable, a hay house, 25 acres of glebe land and “11 or 12 acres of land call’d Lampland”. In 1882 the church sold 4 acres of glebe land to the Great Eastern Railway for the building of the branch line to Burnham. The current street names of Rectory Grove,  Glebe Road and an area marked on maps as Glebe Farm indicate where the Church lands once were.

An 1869 report on “Timberwork in Essex Churches” notes that the roof cuts off the upper part of a flat arched east window indicating that the original roof was of the high pitched type with the flatter roof introduced later. By 1875 the Church was considered too small for current needs, dilapidated beyond repair and it was demolished.

The new church was built in the early English style, cost £1,778 and was consecrated in November 1876. The main contributors to the cost of rebuilding included the Rev. W. Hugo Lukin, David Archer, Thomas Bell, Henry Stone, James Gigney and Colonel Fane. “Little Rosie” and “Little Mable” gave half a guinea each. Some features of the old building were retained such as a 15th century window in the East wall and a 15th century octagonal font. The present Chancel roof is said to be 14th century oak, originally from the refectory of the Priory at Prittlewell. Among people commemorated in church windows are Dr John Marshall, Henry Bell and Henry Stone. The oldest gravestone in the churchyard in memory of Mary Howlett, wife of Thomas, dates back to 1733. It has a skull and crossbones representing death carved upon it, while next to it, Katherine White’s stone, dated 1735, has a cherub representing life after death carved upon it.

St Andrews Mission Church was opened in the London Road in 1934 to deal with increased population in that part of the town. It was used as a youth and community hall during the week. It replaced a Parish Room which had been erected in 1901 and which became the church hall. St Andrews itself was redeveloped in 1964 and became a full parish church when the Team Parish of Wickford and Runwell was formed in 1980.

Links to other information on this site: